By Miranda Raye on February 6, 2019
Advertisement 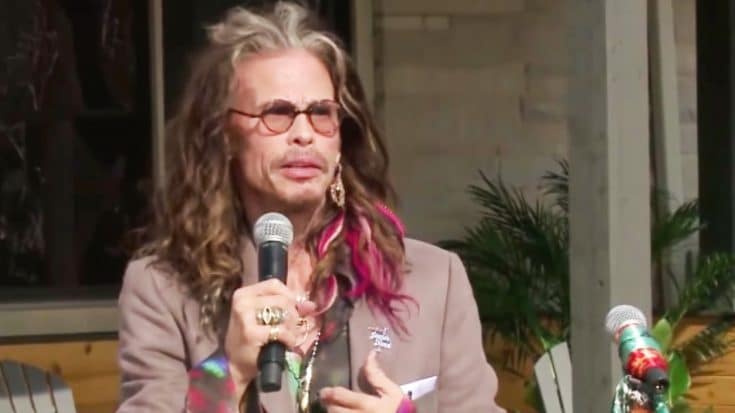 The Song That Sparked It All

In 1989, Aerosmith released a song that packed a serious punch. Titled “Janie’s Got a Gun,” the song tells the story of a young woman who kills her father after suffering years of abuse from his hands.

The song made a profound impact on audiences, and on the charts. It was a #2 hit on the Billboard Mainstream Rock chart and also crossed over to the all-genre Billboard Hot 100, where it ranked in the fourth position.

Aerosmith’s frontman Steven Tyler was the mastermind behind the song’s tragic tale, as he wrote all of the lyrics. In a 1998 interview with Billboard, he explained that he wrote the song because he “got really angry that nobody was paying homage to those who were abused by Mom and Dad.”

But Tyler didn’t just channel his anger into song, he turned it into action.

In 2017, just one year after releasing his debut solo country album, We’re All Somebody from Somewhere, Tyler unveiled his next big initiative.

That was the year that Tyler opened his first center for abused women, a place he named “Janie’s House.” The center, located in Atlanta, was just Tyler’s first step toward providing safe havens to those who need them most.

Another House Opens Thanks To Steven

On Monday (February 4), Tyler helped open another shelter, this time in Memphis, Tennessee. The rocker turned country singer donated a whopping $500,000 to help build and renovate the space that eventually became the second Janie’s House location.

Tyler was on hand for the “scarf cutting” ceremony that opened the home and said a few words about Janie’s House and why the cause matters so much to him.

As he explained, he first felt inspired to write “Janie’s Got a Gun” in the 80s after he entered a treatment center for addiction. While there, he met a number of young women who had suffered abuse, and felt moved by their stories.

“All the girls I met had been abused either physically, mentally, verbally, you know. At least 90% of ‘em all,” he said during the scarf cutting ceremony.

Tyler wanted to be a champion for those women, which is why he wrote “Janie’s Got a Gun” and eventually established the charity Janie’s Fund in 2015.

In the few short years since it was founded, Tyler has helped the charity raise millions of dollars, and has now opened two shelters.

What’s In Store For The Future

The Memphis shelter has helped instill a sense of hope in the women and girls who now live there. One resident, 14-year-old JaBrayia, spoke to WATE 6 News about how the shelter has the potential to change her life for the better.

“Through Janie’s House, I can learn a lot about my past and learn I was not the only one that had been through the same problems,” she said.

The opening of both Janie’s House locations has changed Tyler’s life as well. He is now more devoted than ever to helping abused women and girls.

WATCH: Steven Tyler just opened a home for abused girls named "Janie's House," which was inspired by the 1989 Aerosmith hit "Janie's Got A Gun" https://t.co/lI9n5QGCUU pic.twitter.com/duULoJEXvc

“I’m gonna bring this Janie’s fund with me wherever I go,” he said. “It’s like a dream come true.”

That dream is about to come true in Las Vegas, where, according to the Atlanta Journal Constitution, the third Janie’s House location will open later this year.

Hats off to Tyler for leading the charge to make a difference. You can learn more about how Janie’s Fund came to be by listening to his speech during the scarf cutting ceremony at the new Janie’s House location in Memphis.