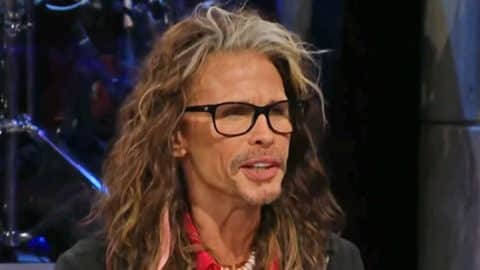 Along with “Carpool Karaoke” and “Drop the Mic,” James Corden’s The Late Late Show has created several very popular segments including “Spill Your Guts or Fill Your Guts.”

Corden and his celebrity guest each sit at opposite ends of a Lazy Susan table full of nasty food including cow intestines, sardine smoothies, bull penis, pig head jelly, vienna sausage juice, dried caterpillars, and lamb tongue. They take turns answering very personal questions, essentially spilling secrets that no one else knows, and if they choose to not answer it, they have to eat whichever food the other person choses for them.

The talk show host was up against Aerosmith legend Steven Tyler and chose what he had to eat should he not answer the question he was given – pig head jelly. After saying a profanity, Tyler whipped out his own knife, fork, and salt and pepper to season the dreaded pig head jelly, which was absolutely hilarious!

Corden then asked him, “How much have you spent on drugs in your lifetime?”

Without really skipping a beat, he responded, “About two million dollars, easy.”

In disbelief, Corden asked, “Are you serious?” to which Tyler responded, “I snorted half of Peru!”

The next question Corden asked Tyler was about Aerosmith, and chose cow intestines as his punishment! The challenge was, “Rank all the other members of Aerosmith in order of talent.”

Tyler immediately grabbed the fork he brought and took a bite of the cow intestines because he has to go on tour with his bandmates, and what he says to them to their faces is bad enough!

The final question Corden asked Tyler was without a doubt the funniest one of the night.

“Your daughter Liv is a movie star. Have you ever hit on one of her movie star friends? If so, who?” Corden asked while Tyler was holding his punishment – a dried caterpillar.

With conviction, Tyler dropped the caterpillar back in the bowl and said, “Why, yes I have,” to loud cheering from the audience.

Tyler explained that he and his daughter were attending Stella McCartney’s party in England and jumped in a van, where he said he was sitting next to Cameron Diaz.

“So I look at this beautiful woman and said, ‘Cameron, should you ever need someone to take you to the movies or you know, or if I was to ask you to show me around London,’ and then of course, Liv went, ‘Daddy! You’re hitting on my best girlfriend!’ And then I got ashamed for a moment,” he said.

But we bet he wasn’t ashamed for long! We can’t believe he spilled those secrets, can you? Tyler teased the episode on Instagram saying, “It’s a really tasty episode…”

Watch the full segment below.