By Jennifer Pernicano on June 19, 2018
Advertisement 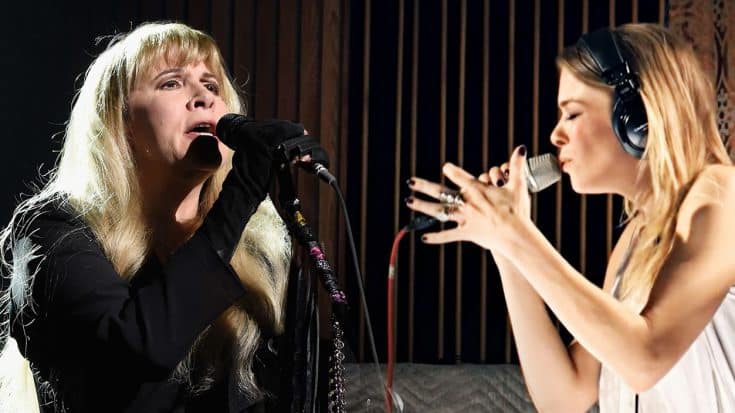 LeAnn Rimes was teasing fans with her 2018 “Reimagined” album that featured a bunch of her top hits and beloved tracks that had been completely reworked into a whole new sound. One of the songs was a favorite of Stevie Nicks – so she asked her to sing a brand new duet of it with her.

Before the actual song’s release, Rimes teased the duet on social media and created quite a stir – with people wracking their brains for any hint they could find as to who her secret duet partner was! Many believed it would be a reimagined version of a duet she’d already recorded…but to everyone’s surprise – it was a whole new duet!

Singing on “Borrowed” from her 2013 LP Spitfire, Stevie Nicks’ unforgettable voice is as prominent as Rimes’ smooth tones – both singers breathing new life into this underappreciated track from five years ago.

The Rolling Stone recently reported Nicks’ discussion about singing alongside Rimes and having called her “the best I have ever sung with,” Nicks then told the story of how the duet came about.

Nicks saw Rimes sing “Borrowed” on The Tonight Show the same year her LP came out – and it had quite the effect!

“I stopped in my tracks and sat down on the floor and started to cry,” the rock icon tells Rolling Stone. “I understood what she was singing about. I understood that the pain was real… and I understood that it had happened to me. When the song ended, I called my assistant to tell her that one day, I would sing this song with LeAnn. It was our destiny.”

Now that Nicks’ destiny with Rimes has been fulfilled – the whole world can appreciate this heart-wrenching country ballad that features two of the best-known singers to ever strike the stage.

Listen to “Borrowed” by LeAnn Rimes and Stevie Nicks below.