By Miranda Raye on February 21, 2020
Advertisement 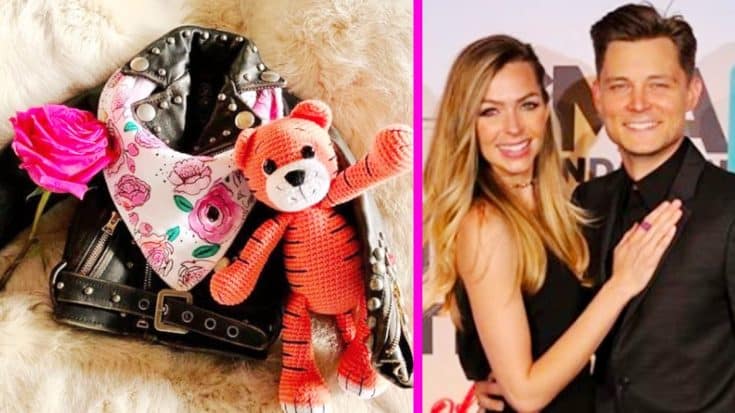 2019 was the year of the baby boom in country music, with dozens of artists welcoming new additions to their families. It was also the year that a number of other artists announced they were expecting.

One such artist was Frankie Ballard, who announced in November that he and his wife, Christina, were expecting their first child. Not long after sharing the happy news, the couple walked the red carpet at the CMA Awards in Nashville.

Speaking to People, the “Sunshine & Whiskey” singer and his wife said they chose to keep the baby’s gender a surprise. They wanted to wait until the baby was born to find out if they were parents to a son or daughter!

Even though they didn’t know if they were having a boy or a girl, Frankie and Christina still knew what they wanted to name their little one. At least, if they had a son!

In a later interview with People, Frankie said he and Christina already had a name picked out for a boy. It was a pretty easy one to come up with too!

“I’m Frank Robert Ballard IV, so if it’s a boy, Chrissy has agreed and is thrilled to name him Frank V,” Frankie said.

?I soak in every little moment with this incredible soul. @frankieballard is a rare breed that loves everything he encounters deeply and oozes talent from every cell in his body. I would do anything for you my love. God is smart and knew the world needed you December 16th?. Happiest of Birthdays to the man I behold. I love you baby?!!!!! And our baby!! Cheers to looking at you kid ?? @iamevandavies

Frankie didn’t say if he and Christina had a name in mind for a baby girl at the time. Whether they did or not, they eventually had to come up with one they liked, because Christina gave birth to a daughter on February 8!

Christina was the one who shared the news of Baby Ballard’s birth a couple weeks after she arrived. Taking to Instagram, she posted a photo of a tiny leather jacket with a pink floral bandana wrapped around the collar.

“God gave us a DAUGHTER!!!” Christina wrote along with her daughter’s birthdate and some pink heart emojis.

Christina also shared what she and Frankie decided to name their baby girl…Pepper Lynn Ballard.

“My cup is running over and full to the brim,” Christina wrote. “Pepper Lynn you’re a precious angel and beautiful gift from Heaven and I love being your Mommy.”

God gave us a DAUGHTER!!! ⁣⁣ ⁣ ⁣⁣ 2?8?2020 ⁣ Pepper? Lynn Ballard ⚡️⁣ ⁣⁣⁣ @frankieballard I’ll never forget this unbelievable day with you and how my heart grew a schimillion times watching you hold our baby girl. Thank you Jesus for my sweet family of 3. My cup is running over and full to the brim. Pepper Lynn you’re a precious angel and beautiful gift from Heaven and I love being your Mommy?? Cue all the tears?

As of press time, Frankie has yet to make his own post about his daughter’s birth. But he did comment on Christina’s announcement, writing, “MY SOUL IS ON FIRE WITHLOVE.”

So far the Ballards have not posted any pictures of Pepper herself. If they do, we’ll be sure to share them with you.

Congratulations to Frankie and Christina on becoming first-time parents. We bet baby Pepper is precious!