Suspect Hiding From Police Found After Farting Too Loud

By Megan Dinsdale on July 10, 2019
Advertisement 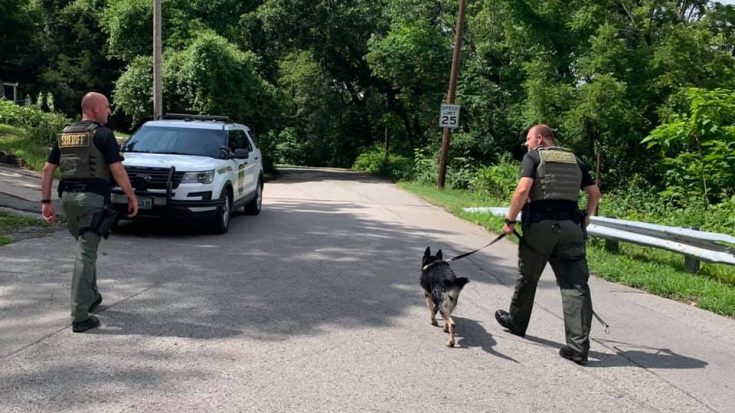 This has to be the worst way to get caught

This past weekend a Missouri man was on the run from Clay County police. The man was issued a felony arrest warrant for possession of a controlled substance. As the police continued to search for the man, they even brought in the dogs to help sniff him out.

The man probably felt like he had a good chance of hiding from the police until the worst possible thing could happen while hiding. The man passed gas, he passed gas so loudly the officers didn’t even need the trained dogs to sniff him out. The police were able to easily find the man’s hiding spot after he passed gas. What a terrible way to be busted, betrayed by yourself.

Well, the police even got a good laugh

The Clay County Sheriff’s Department recognized this as an unusual turn of events and posted to social media. They were able to get a good laugh out of the whole ordeal and shared a photo of the officers searching for the suspect with a police dog.

If you’ve got a felony warrant for your arrest, the cops are looking for you and you pass gas so loud it gives up your hiding spot, you’re definitely having a ? day. ? #ItHappened – Clay County Sheriff’s Department

If you’ve got a felony warrant for your arrest, the cops are looking for you and you pass gas so loud it gives up your hiding spot, you’re definitely having a ? day. ? #ItHappened

Since the photo has been posted people have been chiming in from all over with their witty, or not so witty jokes. Clay County Sheriff’s Department gave props to the police involved for using their senses.

We’ve gotta give props to Liberty PD for using their senses to sniff him out! – Clay County Sheriff’s Department

Even the city of Liberty, Missouri took to twitter after hearing about the arrest

Thank to @SheriffClayCo for airing out a wanted person’s dirty laundry and fanning the flames. – Liberty Missouri

Thanks to @SheriffClayCo for airing out a wanted person's dirty laundry and fanning the flames. The Liberty Police Department was surprised to see this incident slip out, which stinks for the arrestee. Fortunately, no one was injured during his arrest #nervousbelly #nocomment https://t.co/mHPoPds3nv

From what we have learned about the incident no one was injured during the arrest. The police are definitely amused and this will probably be a story they “pass on” over the years!

This reminds us of the baked beans commercial with the astronauts in the video below.