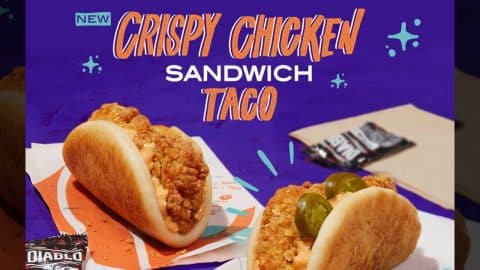 In recent months, one of the Internet’s most-heated debates was which fast food chain had the best crispy chicken sandwich – appropriately dubbed “chicken sandwich wars.”

It came about when Popeyes Chicken unveiled their crispy chicken sandwich, which caused pandemonium, to say the least. Drive-thru lines were extremely long and locations would often run out, which made customers furious.

Does this mean we have an ad in the big game too, y'all? pic.twitter.com/p0sIDxy63C

At first, the debate was only between Popeye’s and Chick-fil-A, but other fast food chains have hopped on the bandwagon and joined the chicken sandwich craze, including Wendy’s, KFC, Burger King, and most recently, McDonald’s.

Chicken sandwich war continues. @PopeyesChicken is top spot still. @BurgerKing might be swinging above their weight class with those crunchies though… pic.twitter.com/l0JW1HyHRk

In a new twist, Taco Bell is now throwing their hat into the ring.

On Monday (Feb. 22), Taco Bell announced that it will begin testing their brand-new chicken sandwich taco in Nashville, Tennessee and Charlotte, North Carolina beginning on March 11.

According to NBC San Diego, the Crispy Chicken Sandwich Tacos will be served inside a flatbread with “a piece of crispy tortilla chicken and chipotle sauce and will sell for $2.49 each. A spicy version with jalapeno slices will also be available.”

Taco Bell is REFUSING to get left out of the fast-food chicken sandwich war 😭😭😭 pic.twitter.com/b85QCOir1u

Previously, Taco Bell has had success with other crispy chicken items including Crispy Chicken Chickstar, Naked Chicken Chips, and the Naked Chicken Chalupa, which is a piece of chicken shaped like a tortilla and stuffed with taco fillings.

Is it a sandwich or a taco? You decide. Try our new Crispy Chicken Sandwich Taco in regular or spicy. Testing at select locations in Nashville, TN & Charlotte, NC starting March 11. pic.twitter.com/7SaC628a40