By Manly Bryant on April 3, 2019
Advertisement 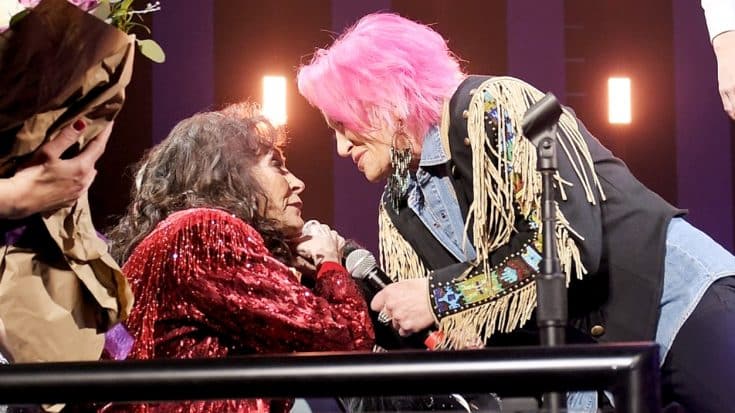 Tanya Tucker is back in action y’all! While attending Loretta Lynn‘s birthday celebration, the “Delta Dawn” star pulled out a new song that was written for her upcoming studio album. One thing is for sure – this country icon has still got it.

Thank you for an unforgettable year! I'm ready for whatever 2019 brings so long as I get to do it with y'all! ?HAPPY NEW YEAR!!!? Are you as ready as I am?!

Tucker took the stage alongside Grammy Award-winning singer, Brandi Carlile who took reign over the piano. Before starting their performance, Tucker gave Lynn a sweet tribute calling her “my hero.”

As Carlile poured out the ballad on the piano, Tucker began integrating her powerful deep-toned vocals for their new song, “While I’m Living.” Directly following her first verse, the crowd was already going wild with support.

The soulful tune kept the audience lively for the remainder of the performance. Tucker ended by joining Carlile at the piano for a warm embrace.

Fans have been waiting to hear new music from Tucker ever since her last album, Tanya in 2002. Now, she is joining forces with Carlile and Shooter Jennings for the ultimate comeback album titled, While I’m Living. Carlile – who is a die-hard Tucker fan – was over the moon about working alongside the country star.

So very proud of two of my favorite people in the whole world, Brandi Carlile, and Shooter Jennings Officialat the…

Carlile is also executive-producing a documentary about Tucker that will be titled Delta Dawn Then and Now: The Return of Tanya Tucker. Jennings will be alongside for co-production as well – talk about a dream team!

Listen to Tanya Tucker’s debut of “While I’m Living” below.