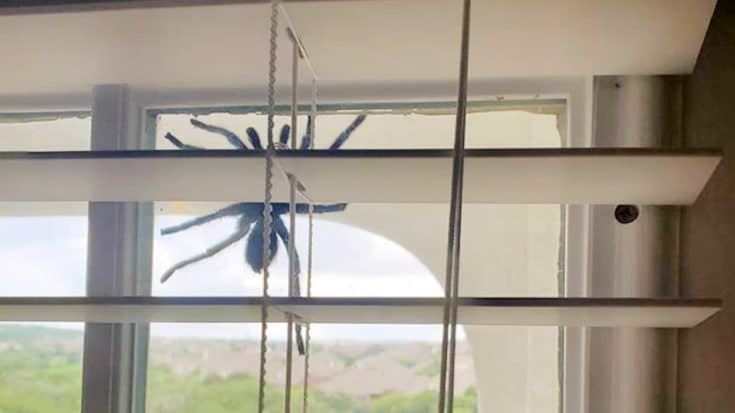 In late 2019, Teouna Thomas and her husband moved to San Antonio, Texas, after previously living in the Dallas-Fort Worth area.

Being new to the area, Teouna and her husband weren’t prepared to be greeted by an eight-legged guest that appeared on their patio door in June 2020.

“I hear my husband yell, ‘OMG what in the heck is that?” Teouna recalled in an interview with KSAT 12.

Her husband’s shock was well-founded. He had just encountered a massive spider on their patio door.

Teouna was also surprised to see such a large spider. “I mean we are in Texas and not in the jungle somewhere,” she said during her interview with KSAT 12.

Teouna and her husband’s concern about the spider didn’t just stem from fear. Their family dog had also noticed the creepy-crawly, and was trying to get to it.

THIS IS NOT A TOY GUYS…I PROMISE I'M STILL SHAKING. Someone please tell me what this is?

In order to keep their dog from eating the spider, Teouna’s husband stepped outside and captured it in a plastic food container. The family’s next course of action was to call their apartment’s front desk. An employee came, took the spider from them, and released it back into the wild

So what type of spider did the Thomas family encounter, and just how big was it? KSAT 12 spoke with the arachnid and the ectotherms team at the San Antonio Zoo, who believes the spider was a Texas Tan Tarantula.

“The experts at the zoo tell us they are harmless to humans,” read KSAT 12‘s report. “All spiders have venom, but you’d have to try hard to get bit by one of these spiders...”

The zoo experts also told the publication that Texas Tan Tarantulas can grow up to six inches in length. That’s huge for a spider!

Learn more about the Texas Tan Tarantula by tuning in to the video below.

Have you ever encountered a large spider like this around your house before? How did you react?