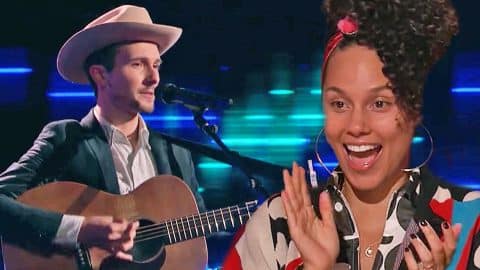 The coaches on The Voice had no clue what was in store for them when 25-year-old Taylor Alexander hit the stage for his blind audition.

From Flowery Branch, Georgia, Alexander has lived in Nashville for the past three years as he’s pursued a career in country music.

But the song Alexander sang for his blind audition was originally far from country. Titled “Believe,” the tune was released in 1998 by music icon Cher. The song is still one of Cher’s most successful singles to this date, with over 11 million copies sold worldwide.

It’s hard to mistake “Believe” and its catchy, dance-pop beat. However, what Alexander did to the tune left everyone but Adam Levine stumped as to which song it was.

Although he was singing a pop song, Alexander still wanted to stay true to his country roots. As a result, he transformed “Believe” into a whole new song with a country-fried sound.

Levine recognized it was a Cher song before anyone else, and turned his chair as soon as he did.

The other coaches later admitted that they were equally impressed, but just didn’t get the song figured out in enough time to appreciate his performance as much as Levine did.

Since Levine was the only one that turned around, Alexander earned a guaranteed spot on his team. “You are so weird and wonderful!” Levine declared.

After Alexander’s performance aired, people started drawing comparisons between him and one of country music’s greatest legends…Hank Williams.

While Alexander’s voice is completely his own, we have to admit that he does look a lot like Williams!

Can you see the similarities? Let us know after you watch Alexander’s cover of “Believe” in the video below.