By Manly Bryant on September 25, 2018
Advertisement 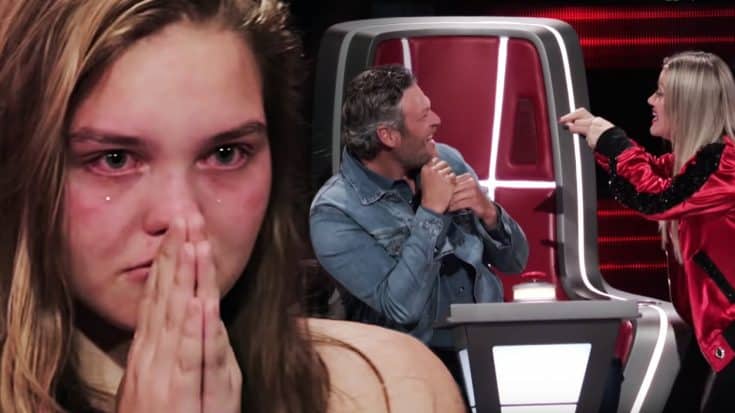 Opening the brand-new season of this fan-favorite singing competition was a Greenville, North Carolina musician whose family was in tears as they thought none of the coaches had turned for him…

In one of the first auditions of the 15th season of The Voice, Mikele Buck showed off his rugged and rough sound in a throwback to the 1990s group, Brooks & Dunn. Immediately he had caught the attention of both Kelly Clarkson and, of course, Blake Shelton.

So this happened to me this year! Thanks to everyone who talked me into taking this opportunity! Tune in @nbcthevoice on Sept 24th to see how I did! #countrymusic #thevoiceseason15 #singersongwriter #nbcthevoice

Singing “She Used To Be Mine” from Brooks & Dunn’s 1993 album Hard Workin’ Man. At the very first note, both Shelton and Clarkson perked up and looked at one another before exclaiming how much they each loved this song.

Both excited, the audience and even Buck were surprised that neither had turned their chair for him before he got to the very last note of the song. As he held the note longer and turned away, both Clarkson and Shelton smashed their buzzers at the same time – hoping they would be able to swoop in at the last second to steal him.

Tune in Monday night and watch the season premiere of @nbcthevoice! You may see me on there?! Tonight @rock_ridge_bar_and_grill with the band! Come pre-Party with us!! #countrymusic #singersongwriter #reddirtmusic #livemusic #thevoiceseason15 #beardedmen #beardedtattoo #tattoo

As Shelton and Clarkson fought to win Buck over for their team, they each tried to persuade him using a multitude of tactics to appeal to his future music dreams. Clarkson, for instance, name-dropped her husband and pointedly mentioned that he is Shelton’s manager.

Shelton, on the other hand, tried to appeal to their similar country roots and his longstanding tenure on the show as an asset.

Unbeknownst to either of them, it would be Buck’s three daughters who made the ultimate choice for him.

“Team Kelly!” they screamed from backstage.

After hearing that, Buck knew who he had to choose and opted in for Kelly Clarkson’s team, and she was completely surprised!

Taking to social media for a question and answer segment, he explained exactly why he decided to pick Team Kelly.

Buck, who started his own band in Greenville, has been performing on the stage for years and even earned the opportunity to open for country hitmakers like Jason Aldean and Joe Nichols. Now, Buck will get the opportunity of a lifetime and compete on this star-making tv show!

Watch Mikele Buck’s full audition below and let us know if you think he chose the right coach!