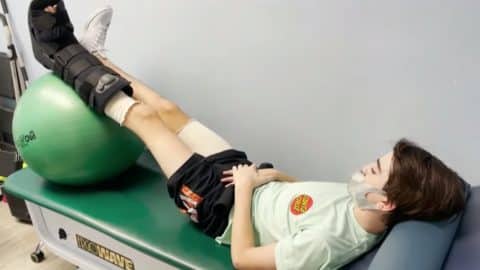 Lucas Cruz was with his grandpa and other family members out on the water in Miami lobstering when he was attacked by a 500-pound bull shark.

The 15-year-old said that he saw a lobster and tore off in its direction to capture it. Once he had it in his hand, he turned around to bring it back to a bag where they were collecting the marine animals and that’s when he was attacked.

“It doesn’t feel anything like what you would think,” Lucas told News Nation Now. “I thought I got hit by a boat. But then I looked above the water and realized there’s no boat near us or near anybody in the water. So then I just realized it was a shark after that.”

“He was definitely showing signs of blood loss,” Dr. Rizal Lim of the Burn and Reconstructive Centers of America said. “Luckily, most of the bleeding was from muscle. You know, muscle can bleed, obviously, quite a bit.”

Dr. Lim said that if his team at the trauma center didn’t act as fast as they did he would have lost a lot more blood. After receiving medical treatment, Dr. Lim says Lucas is on the road to a full and speedy recovery.

“He’s a young guy, you know, we’ll see what other reconstructive needs he has, in terms of skin and soft tissue,” Dr. Lim said. “But my guess is that he’s going to be back to normal soon.”

Lucas added, “The doctors told me today that I could start putting pressure on my legs, so that’s good. The wounds are all closed from what I’ve seen. It’s getting a lot better.”

A News Nation Now reporter asked him if he was going to get back into the water and he responded with he is, but not anytime soon. His family does a lot of events on the water and he doesn’t want to not attend them due to this one incident.

“I think if I stopped going in the water as a whole, I think it would be missing out on a lot,” he said.