By Manly Bryant on December 11, 2020
Advertisement 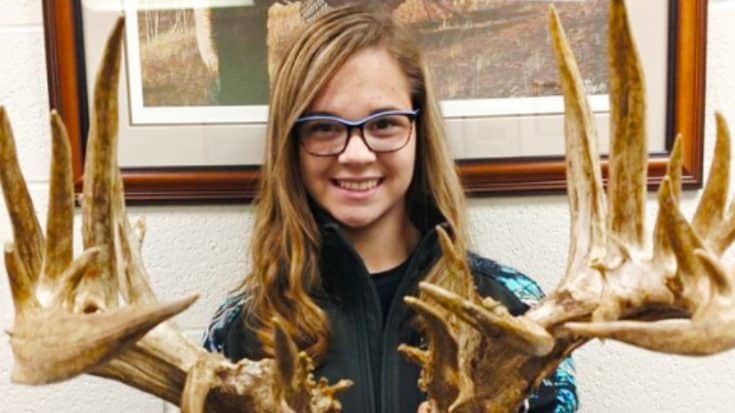 Cimarron teen, Paslie Werth, harvested a record-breaking buck just one day after youth season opened. The 14-year-old came across the record-breaking animal while hunting with her father, Kurt.

“On Sunday, we hadn’t seen a deer yet, and then when we went out that evening, I had no idea he’d be there and stand up 25 yards away,” Kurt recalled the experience to KSN News.

Paslie admitted that she initially did not believe the buck would be such a large score. The teen explained that the trail camera photos did not accurately show the mass of the buck.

“When we got the score, it was hard to wrap around because none of us guessed it to be that much. And it was just very surprising, and I kinda couldn’t believe it. The trail camera pictures that we got, did not do it justice,” Paslie told the local news network.

The buck at 42-scorable points first ranked an unofficial gross green score of 282 6/8 inches with 44 points in total.

“When we walked up to him, and we seen how big he really was that night, it was unbelievable how many points he had,” Kurt explained proudly.

Following the mandatory 60-day drying phase, The Boone and Crockett net score named the rack the largest non-typical whitetail harvested by a female in the world. The official net score fell at 271 4/8 inches.

The deer was not a random find. The record-breaking buck was harvested on family land in Kiowa County. For nearly three years, the family watched the deer.

Paslie accomplished every hunter’s dream at a very young age, but the teenager has harvested bucks since she was 11. For Paslie and her family, hunting is their way of spending quality time together and creating memories. Paslie explained:

“We were so happy then and that was probably the best moment of it. Being able to share the experience with my dad, it was just really fun.”

Who thinks that they can break her record?