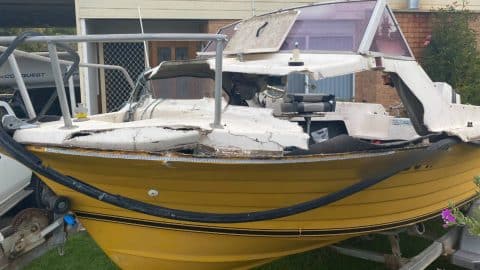 The NSW Police Force patrolling over the Marine Area Command released a statement on Tuesday reminding people to be aware of their surroundings and maintain safe distances while on the water during whale migration this season after a father and son were injured.

Authorities said a 39-year-old male skipper made a mayday call in for rescue after a colossal whale breached the water and landed on their boat. The man was with his 18-year-old stepson who’s head was seriously injured during the random encounter.

The stepfather, who was also injured with facial lacerations, drove the boat as it was taking on the water all the way back to shore where he met paramedics. Both of them were transported to a nearby hospital for treatment and a GoFundMe page has been setup for Nick.

“The extent of these injuries, and long-term implications is not known yet. Matt and Nick are seasoned fishermen, and this was an accident that could have happened to anyone,” the family said, according to Daily News.

The 18-year-old was airlifted from Moruya Hospital to Canberra Hospital where he remains in a critical but stable condition. Marine Area Commander, Superintendent Joe McNulty, said  Maritime NSW has launched an investigation into what happened.

“While inquiries are in their infancy, the incident demonstrates the dangers these mammals can pose to those on the water,” Joe said in the statement. “We encourage anyone hoping to get a closer look to maintain a safe distance as outlined in the Biodiversity Conservation Regulation 2017.”

Wildlife officials said the whale was seriously injured during the incident and NSW National Parks and Wildlife Service will work with the Organisation for the Rescue and Research of Cetaceans in Australia to monitor and ensure help is provided if required.