Tennessee Replaces Goalposts Almost As Fast As They Were Torn Down

By Manly Bryant on October 18, 2022
Advertisement 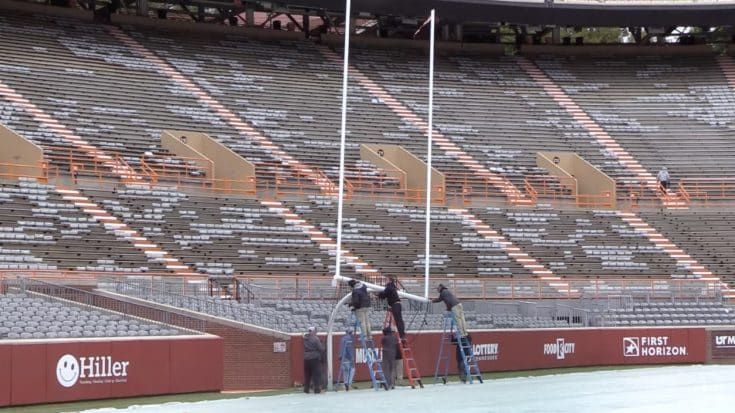 Staff members with the University of Tennessee almost replaced new goalposts just as fast as they were torn down on Saturday night’s football game against Alabama.

Video footage showed crews inside Neyland Stadium on Tuesday replacing the goalposts which took them around 30 minutes from start to finish to install them both.

The university’s officials said that they actually already had the goalposts in their possession before the game on Saturday. However, Danny White, the director of athletics still set up a donation page to raise $150,000 to buy two more so they always have two ready in case they need to be replaced again.

Within one day of announcing the donation page, Vols fans quickly raised the money quickly and donated more than the $150,000 the school was asking for. White says they plan to go ahead and order two more now to have them on deck as soon as possible.

As for the old goalposts, one of them was sawed up into souvenir pieces right there on the Neyland Stadium field and taken home by Vols fans.

The other goalpost was notoriously carried out of the stadium, paraded through the streets, and then tossed into the Tennessee River.

Footage Of The Fans Carrying Goalposts On The Field

@countryrebelAfter defeating BAMA 52-49 in a historic upset, fans stormed the field and tore down both goal posts!! Hundreds of fans then carried the goal posts for over a mile and eventually tossed them into the TN river!!♬ original sound – countryrebel

For those who have been living under a rock, the Volunteers won against Alabama, 52-49, and fans stormed the field and tore down the goalposts in celebration.

@countryrebelTennessee STUNS Alabama 52-49 in unbelievable game at Neyland Stadium in Knoxville, TN! After a grueling back and forth battle, the Volunteers kicked a game winning field goal and snapped a 15 game losing streak to one of their biggest rivals. TN quarterback Hendon Hooker put on a clinic tossing 21-of-30 for 385 yards and five touchdowns!! Gooooood Ol’ Rocky Top, (wooo) Rocky Top TENNESSEE!!♬ original sound – countryrebel

Watch Footage Of Crews Setting Up The New Goalposts