By Manly Bryant on November 22, 2019
Advertisement 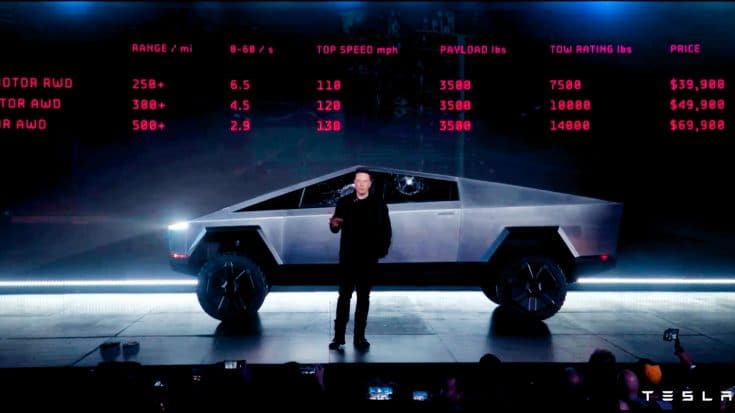 The highly anticipated pickup truck from famed American electric car maker Tesla has finally been unveiled – and the event didn’t go as planned.

Elon Musk, the outspoken CEO of Tesla, took to the stage amid a series of colored lights and lasers in one of the company’s flashiest presentations to-date.

“100 years of the same,” read the first few slides of the opening presentation.

It appears that Tesla is looking to disrupt the truck industry by releasing something nobody expected – and many have a hard time believing is even real.

I never knew a vehicle could be so ugly, yet still really cool at the same time.#TeslaCyberTruck #Tesla pic.twitter.com/rqsGP1KrPw

“Trucks have been the same for a very long time, like 100 years,” Musk said during the demonstration that was live-streamed worldwide.

The brand new Tesla “Cybertruck” – as they call it – was inspired by James Bond films and takes up a very angled, boxy, and geometric design that, truthfully, doesn’t even look like a truck.

You might not even know it had a bed in the back if you didn’t get up close to it or see it hauling something.

The question is, what do you make of that 'interesting' design?! Check out Mat's latest video for a closer look! https://t.co/D57kUtRflH pic.twitter.com/7GotPWylR7

The body of the Cybertruck is made of a single piece of “ultra-hard 30x cold-rolled stainless steel” and a new hardened glass Tesla is calling “Armor Glass.”

The truck, which will outperform many with its amped-up specs, and optional tri-motor design, starts at just $39,999 for the base model. You can reserve one now, but there has been no clear release date given.

Watch a few clips from the presentation below and let us know what you think in the comments.