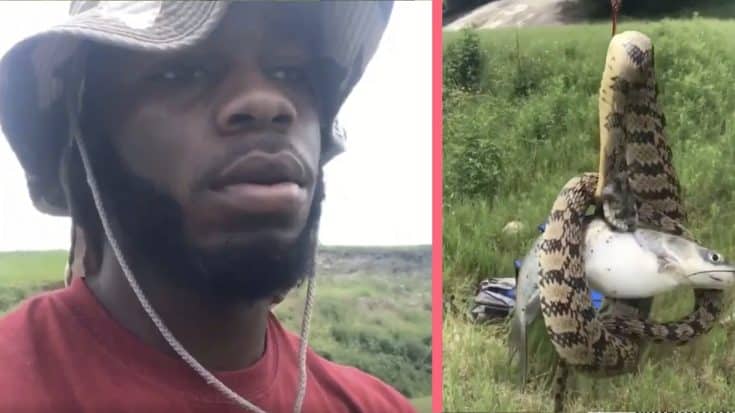 Texas Wild Boy with the Twitter tag “ChaseThePlayBoy” posted a super hilarious video of himself fishing at the river and holding up a snake on this fishing line that has a mouth full of a bayou fish.

The fish was massive and still alive, way bigger than it appears the black and brown snake could have swallowed. However, that snake wasn’t giving up on that fish, nope. He held on like it was the last meal he was getting for the year.

“The things I go through with bayou fishing,” Chase wrote.

One of the funniest parts of the video was at the end where it shows Chase’s face completely dumbfounded and looking shocked at what he caught. The Twitter comments are funny too.

One Twitter user wrote “Bruuuh, SEE THIS IS WHY I HATE SNAKES!!! THEY ON THE GROUND, THEY IN THE WATER AND THEY IN BE IN THE SKY IN THEM AIRPLANES, NO ONE IS SAFE”

Another person in the comments said, “I really just want to know what you did after this,” and a list of answers to this question were comical but one of the best comments was this:

The only choice: Square up with the snake to see who gets the fish.

Since Chase posted the Tweet it has gotten over 54 thousand retweets and 215 thousand likes. It’s super impressive for a guy who just happened to film this and post it online.

The things I go through with bayou fishing ???? pic.twitter.com/5E5qqg6Ira