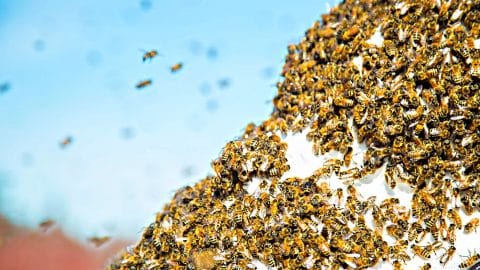 Austin, Texas resident Emily Frank was walking her dog Dexter through her neighborhood near the Onion Creek Greenbelt when they were attacked by killer bees.

She said it was like they came out of nowhere in a massive swarm and started stinging both Dexter and Emily all over their bodies. She grabbed Dexter and took off running trying to get away. The swarm followed her and continued to sting them.

“At that point, like, there was just this like swarm of them, and so I didn’t know what to do,” Emily told KXAN. “I was like swatting them away, I was trying to get them off of him. And then at one point he was just laying there and he was like, blanketed, like, like with these bees.”

They were finally able to get away and a neighborhood friend, who was also a nurse practitioner quickly helped Dexter by giving him epinephrine. A park manager pulled up and called 911 to get them to a hospital.

The dog was almost killed due to over 80 stings to the face, which caused fever and muscle pains, but was taken to the animal hospital and is expected to make a full recovery. Emily was also taken to the emergency room and is also on the mend.

Mary Reed, chief apiary inspector at Texas Apiary Inspection Service told KXAN, “In the event of a bee attack, it is critical that the person get into an enclosed space (i.e a vehicle, building) as quickly as possible and remain there.”

“Bees will follow you into that space and continue to attack, but this is less of a threat than if you were to exit the vehicle where the majority of the bees are still active. Honey bees can only sting once, so it’s best to remain in the enclosed space.”

Hear More Details In the Video Below