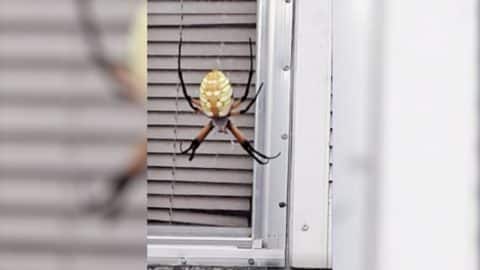 A woman from Arlington, Texas emailed her local news station asking for help identifying a rather large spider spinning a web along her window’s edge. She sent in a photo and experts reached out to help calm her nerves.

NBC5 News got experts from the Texas A&M Agrilife Extension Service to crack the case. According to them, the rather large spider is a harmless garden spider known as the Orb Weaver spider. They offered a side-by-side photo comparison and noted the undeniable zig-zag pattern of the web.

According to Wildlife Heritage,

“Orb weavers are very docile, non-aggressive spiders that will flee at the first sign of a threat (typically they will run or drop off the web). They are not dangerous to people & pets, and are actually quite beneficial because they will catch and eat a lot of pest-type insects.”

Orb weavers are typically seen around dusk/night but can sometimes appear in the early morning. During the day, the spider will prefer to either sit motionless in the web or move off the web. At night, the orb weaver is more active, repairing any damage to its web, and is generally found sitting in the middle of the web.

For more on the Orb weaver spider check out the video below.