The Horror: Alligator Found With Eyes And Snout Taped Up 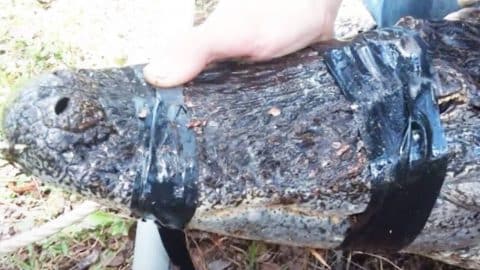 In Florida, it’s pretty common to spot an alligator – but no one would ever imagine they’d see something like this.

Barbara Thornton and her husband saw an alligator in Sweetwater Canal, off of Wekiva River in Longwood, Florida that looked to be very large, but she said, “Its snout, its eyes were bound.”

“I just couldn’t believe what I saw,” she told WESH2 News. Her husband added, “Why would anyone go to the trouble of trapping such a big gator and then just letting it go to die, fully bound, I don’t understand it.“

The Thortons called the Florida Fish & Wildlife Conservation Commission right away when they saw the alligator. WESH2 reports that a trapper measured the alligator to about seven feet long.

Locals who heard about the alligator put up $500 as a reward to anyone who can help catch the person who taped up the gator. WKMG reports that the Orlando attraction Gatorland is putting up $1000 to whoever can find the person who did this.

Not only were the alligator’s eyes and snout taped up, its hind legs were also bound.

“The hind limbs were very tightly bound, not together, but it was so tight you could see it was squeezing the circulation,” Jack said, while his wife said, “Whoever did this, shame on you.”

See the news report on the story below.