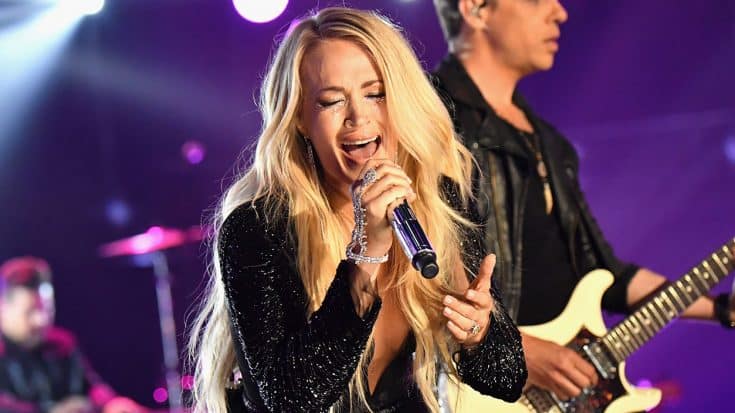 Country superstar Carrie Underwood made her triumphant return to the stage in April at the ACM Awards with an epic performance of her brand new single “Cry Pretty.” It is being called a “return” because she was absent from the public eye since November 2017 when she fell down concrete steps outside her home and suffered a broken wrist, as well as needing upwards to 50 stitches in her face.

Now that that drama is all behind her, she is prepping a new album, which is due out September 14, along with getting ready for several more high-profile performances. One of those performances is the long-awaited CMT Music Awards.

Underwood’s ACM performance was a last minute announcement, so fans really didn’t think they’d see her perform live until CMA Fest this week. Just last week, she revealed that she’d be singing at the CMT Music Awards – and fans couldn’t contain their excitement.

Underwood’s fans had high expectations, but she completely blew them out of the water with this epic performance! Dressed in a gorgeous sparkly black dress with her now-signature “glitter tears,” Underwood belted her new single, which is currently climbing its way to the top of the Hot Country Songs chart.

While we thought the performance was amazing, people on the Internet really could not handle themselves. Check out some of the reactions below.

CARRIE IS THE GOAT ?

We dont deserve @carrieunderwood that women is INCREDIBLE #CMTawards

Disco Queen. Country Queen. THE Queen! ??????
And… another stunning performance of #CryPretty. Perfection. ????

I would die for @carrieunderwood … NO,She has already killed me with her shape and voice ???She is the most meaningful ，powerful, beautiful person on this planet ? pic.twitter.com/j5kNcTErfy

Loved that performance..
Love this song
Love YOU CARRIE

What did you think about Underwood’s performance? Watch it below!