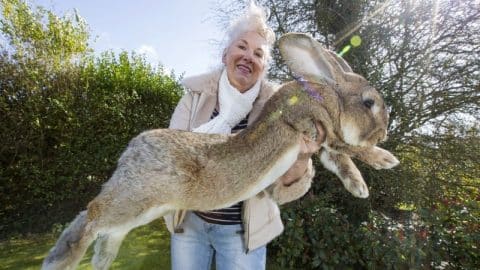 The worlds largest rabbit is Darius, a Flemish Giant rabbit that weighs 49 pounds and measures out to an impressive 4 feet and 4 inches.

Darius officially became the world’s largest rabbit when Guinness World Records measured him on April 6th, 2010. Since then he has consistently won the “largest bunny” competition and recently retired after an eight-year winning streak.

He’s owned by Annette Edwards, a lovely 66-year-old lady who’s also the oldest glamour model in the United Kingdom. She’s been a glamor model for 40 years. Now that Darius has won the biggest bunny competition 8 years in a row, they’ve both decided to retire back to the peaceful life of Annette’s garden.

“They run free in the garden during the day and at night go to sleep in their cosy crates.” she says.

Bunnies usually only live to about 8 years old and fortunately, Darius’s good health has allowed him to live much longer than that. He eats 2,000 carrots and 700 apples per year and munches through a bale of hay per week, with the occasional bowl of fruits and veggies of course. Annette spends a total of $7451 a year to feed him.

“The giant rabbits may not always be the first rabbit someone thinks of for a companion animal, but they actually have some of best temperaments and have a very docile nature.” says Eric Stewart, Executive Director of American Rabbit Breeders Association (ARBA).

Annette is expecting Darius’s son Jeff to outgrow him in size because he’s already very big and he’s not done growing yet. May you live a long and happy life, Darius! — If you liked hearing about this big bunny then check out the Guinness World Record for a steer with the longest horn spread.