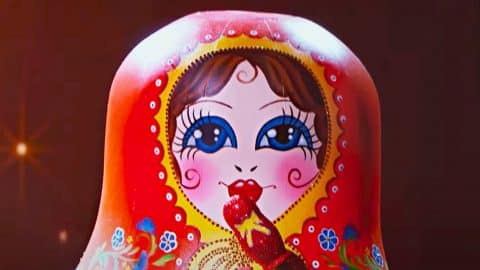 The singing competition, The Masked Singer, is in the midst of season five, and the top-secret celebrity talent is jaw-dropping.

On The Masked Singer, celebrities dress up in elaborate costumes to conceal their identities and perform musical renditions for a panel of judges. The least popular star performance is eliminated each week and unmasked. Up until the celebrity’s identity is revealed, viewers are given hints about each performer.

Season five contestant, the Russian Dolls, have kept the judges and audience on their toes. The judges are undecided if the dolls are a band or a collaborating couple of celebrities.

While their identity is still up for debate, the Russian Dolls are incredibly talented. Two masked dolls performed a rendition of Lady Gaga and Bradley Cooper’s “Shallow.” The dolls remained in perfect harmony throughout the song and impressed the judges with their vocal abilities.

See a clip of the dolls singing below.

While it appeared that just two singers covered the A Star Is Born soundtrack hit, the Russian Dolls hinted that multiple group members were hiding inside the largest costume on the stage. Traditional Russian dolls slowly decrease in size and can be hidden inside each other.

Who do you think is inside the Russian Doll costumes? Watch the full performance and judge theories below.