By Manly Bryant on November 28, 2022
Advertisement 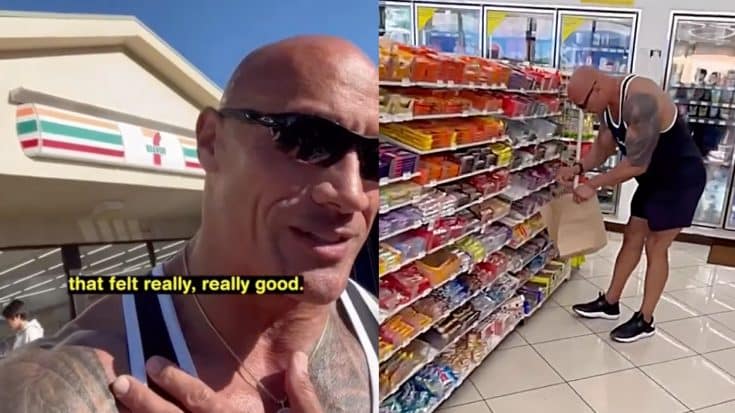 Dwayne “The Rock” Johnson dropped a video on his Instagram revealing that he used to steal king-sized Snickers bars from a local 7-Eleven convenience store and made a sweet gesture to right his wrongs.

The video starts off with him saying, “I have been waiting decades to get ready to do what I’m going to do now. When I was 14 years old every day I used to stop here at this 7-Eleven and steal a king-sized Snickers bar because I couldn’t afford to buy one.”

Footage showed The Rock walking into the convenience store and asking the cashier where the Snickers bars were before going to the aisle and literally grabbing every Snickers bar off the shelf and putting them into a bag to take up to the counter.

He explained that he was only 14 years old when he was stealing the chocolate bars to complete his pre-workout diet but now decades later, he has made it his conquest to right his wrong of shoplifting.

“That was my pre-workout food and I did that for almost a year, every day. So I had to come back, and buy every Snickers bar on those shelves,” he explained in the video.

The Rock said at the time, the cashier of the store knew the superstar was stealing from him but he never called the law or busted him for it.

After the cashier counted up all the candy bars, The Rock looked around the store and then offered to pay for everyone’s stuff who was waiting in line spending a total of $298.

When he was finished, instead of taking the snicker bars home with him, he left them on the counter and told the cashier to give them to people who look like they might be stealing Snickers.

“I’m going to leave these here. If somebody looks like they’re stealing a Snickers, give them one of these so they don’t steal,” he said. “After decades of me wanting to come back home to 7-Eleven and try and make good, that felt really good. I’m out, Snickers and 7-Eleven.”

After posting the video to Instagram, he captioned that even though his past cannot be changed, doing good deeds now is the only way to redeem what he did.

“We can’t change the past and some of the dumb stuff we may have done, but every once in a while we can add a little redeeming grace note to that situation and maybe put a big smile on some stranger’s face,” he wrote.

Watch The Rock’s Video Below