By Jennifer Pernicano on August 31, 2021
Advertisement 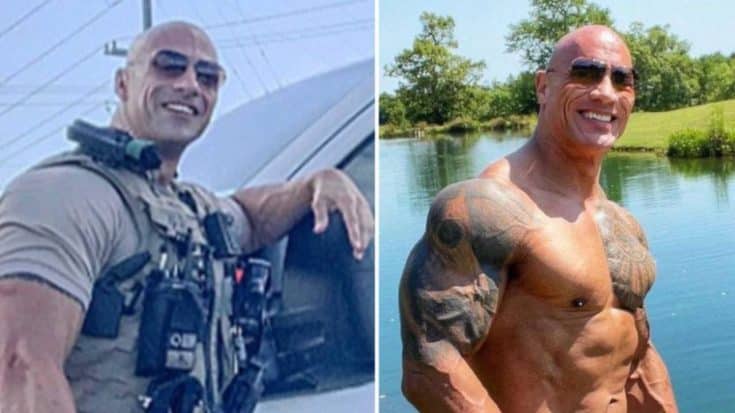 Mid-August, th te Morgan County Sheriff’s Office in Alabama posted a photo of one of their officers, it went completely viral for one reason. And that reason is because the officer looks like Dwayne “The Rock” Johnson’s twin!

When we first saw this photo, we had to do a double take and make sure this wasn’t a photo from the set of Johnson’s upcoming new movie! Someone on TikTok saw this photo and made a video about it, which had hundreds of people going to the Sheriff’s Office Facebook post.

“TikTok sent me here,” lots of people wrote on the photo, while others made jokes and said, “This is not The Rock, this is The Boulder.”

The man’s name is Lieutenant Eric Fields, and he is a married to a nurse named Wendy and they have two small children. He even has a tribal chest and shoulder tattoo, just like The Rock!

Lt. Fields has become so popular online that when a citizen ran into one of his co-workers, they requested to meet Lt. Fields!

Check out some more photos of Lt. Fields that will make you double take!

It seems that Lt. Fields has gone so viral that even The Rock himself has seen these pictures – and he even responded to them!

“Oh shit! Wow,” he wrote. “Guy on the left is way cooler. Stay safe brother and thank you for your service. One day we’ll drink @Teremana and I need to hear all your ‘Rock stories’ because I KNOW you got ‘em.”

Oh shit! Wow.
Guy on the left is way cooler.
Stay safe brother and thank you for your service. One day we’ll drink @Teremana and I need to hear all your “Rock stories” because I KNOW you got ‘em ????? #ericfields https://t.co/G38tOr68cW

We hope they get to meet soon…and of course, document it!