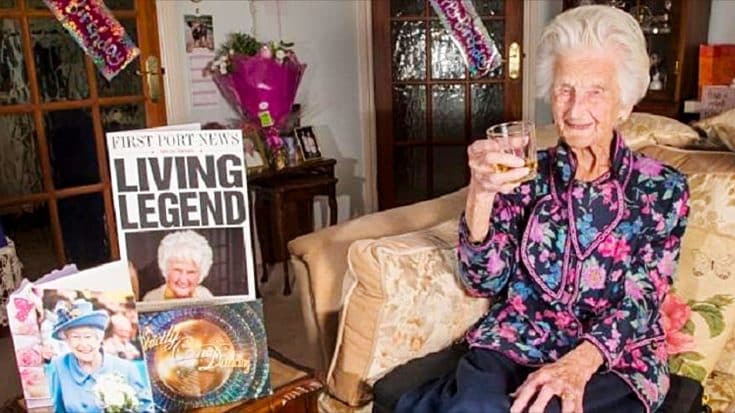 112 trips around the sun and this wise woman has the piece of advice that has helped her do it.

Grace Jones or as she has been nicknamed, “Amazing Grace” is the oldest living person in Britain. At 112 years old, she is still the life of the party – thanks to her little secret.

A Glass A Day Keeps The Doctor Away

Jones has been drinking a glass of whisky every night for the last 62 years. She told ITV News that just a little serving of her favorite whisky, Famous Grouse single malt, every evening has had a positive impact on her health.

Jones even admitted that her doctor is on board with her routine nightcap!

“My doctor said, ‘Keep up with the whisky Grace, it’s good for your heart.”

Not to mention, Jones claims she still feels as good as she did at 65! Aside from the relaxing beverage, Jones believes having a worry-free mentality will aid a longer life, as well as keeping positive.

“Don’t worry. I don’t worry.” She gracefully continued, “If you worry it gets you down. I never, ever worry.”

Jones was born 0n September 16, 1909. The highlight of her life was when she married her late husband, Leonard Roderick Jones in Liverpool in 1933. Describing him as a “true gentleman,” his memory holds a special place in her heart to date. Unfortunately, Leonard passed away in 1986 after 53 years of marriage together.

Nonetheless, Jones has kept up her happy spirit every decade since. Celebrating every birthday is still as special as the last one thanks to her dear friends and family. Jones’ daughter, Deirdre spoke some sweet words about her leading lady.

“My mother is extraordinary. She’s still very particular over her appearance and insists on always looking her best.” Deirdre continued, “She is glamorous, beautiful, and intelligent. She is really alert and still with it.”

Her daughter even acknowledged her mother’s love for a nightly glass of whisky – contributing it to her long life.

Grace Jones has been alive for both world wars, 26 Prime Ministers, and even the sinking of the Titanic. She has lived an adventurous and inspiring life that we all can learn from.

So grab that whisky and pour yourself a glass y’all!