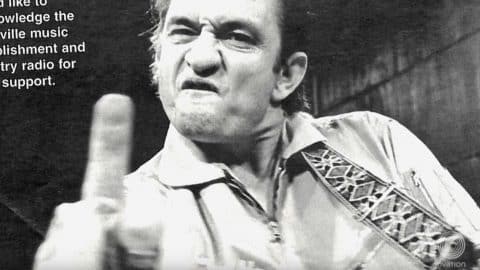 Out of all the legendary things Johnny Cash had done in his career, there is one story that resonates with fans everywhere.

Flashback to late February of 1969 – Cash was gearing up to play a concert at San Quentin State Prison in California. While Cash performed some fan-favorites, he debuted two songs live for the first time: “San Quentin” and “A Boy Named Sue.” The recording of the concert was made into a live album and television documentary for the UK, but an unexpected piece of history was also documented that day.

Cash was asked by photographer Jim Marshall to express his feelings toward the prison authorities. Marshall requested,

To which Cash flipped the camera the bird, becoming one of the most famous photos of its time. Marshall has gone on to claim that the photo was “probably the most ripped off photograph in the history of the world.”

Even if you don’t know Jim … you likely have seen iconic photographs by #JimMarshall: the Haight in the psychedelic…

It wasn’t until 1998 when the photo resurfaced for one monumental movement.

After some time out of the music world, Cash joined forces with legendary producer Rick Rubin. Cash and Rubin produced his American Recordings album – rejuvenating the country star’s career. As a wave of new and classic fans came falling over Cash’s music, he found himself back on his feet.

The pair went on to produce Cash’s Unchained album which won the 1998 Grammy award for Best Country Album. While Cash was having a second whirlwind of success in the music industry, one department didn’t care much for his music at all.

None of Johnny Cash’s music was being played on country music radio – even following his big Grammy win.

Robin was initially shocked having worked with legendary acts such as The Beastie Boys, Metallica, and Tom Petty. But he quickly learned country music radio was a whole new monster. After deciding country radio was more of a “trendy scene,” Rubin was ready to fire back at Music Row.

Rubin went and pulled out $20,000 in order to take a full page ad out in Billboard Magazine. The ad featured the famous shot of Cash flipping off the camera with the caption,

“American Recordings and Johnny Cash would like to acknowledge the Nashville music establishment and country radio for your support.”

The Ad That Johnny Cash And Rick Rubin Actually Once Took Out In Billboard, Acknowledging Country Radio And Nashville…

Rubin spoke on his purpose for the sting.

“We hope it will open the eyes of the country community and hopefully they’ll say, ‘The guy did win.'” He continues, “And he’s making records considered the best in the country and maybe we should readdress the situation.”

Not only did the ad make national news but some of country music’s biggest legends backed Cash up and loved the fire.

Willie Nelson hung up the ad inside his tour bus, telling all: “John speaks for all of us. Everyone who comes in has to see it.”

George Jones loved the ad so much he decided to make one of his own. Promoting his song, “Wild Irish Rose,” Jones was surrounded by basketballs, footballs, and baseballs with the caption,

“If radio had any, they’d play this record.”

His message continues to resonate with music fans across the world to this day.