By Tiffany Smithson Aaron on May 21, 2019
Advertisement 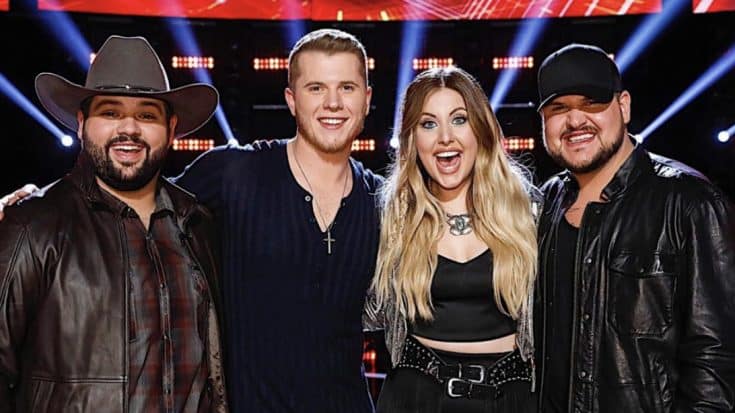 Season 16 of The Voice has come to an end. While we’re sad to see it go, we can’t help but be excited about all of the amazing talent this season has brought us.

In addition to some of the best talent the show has ever seen, we were also introduced to a new judge (John Legend) and a new format (Cross Battles). The result was a unique season that left us looking forward to what the future holds for the show and its talent.

During Tuesday night’s season finale, a new Voice winner was crowned. Longtime coach Adam Levine and back-to-back winning coach Kelly Clarkson failed to have any contestants in the finale, giving first-time coach John Legend with his first and only finalist and Blake Shelton with three reps going into the finale.

Team Legend’s Maelyn Jarmon was a front-runner from the moment she received a rare four-chair turn during her Blind Audition where she performed a chilling rendition of “Fields of Gold.”

When Jarmon was two-years-old, she had tubes put in her ears in an attempt to help treat infections. The procedure led to damage in both her ears, leaving her with no hearing in her right ear and 80% hearing in her left. Throughout her Voice journey,  Jarmon’s hearing impairment may have felt like a disadvantage to the singer herself. But, for fans watching her perform, her performances have never been anything less than perfect.

Team Blake’s Gyth Rigdon has been a favorite of country fans throughout the season. The 25-year-old Louisiana native earned a three-chair turn with his cover of Uncle Kracker’s “Drift Away.” Blake Shelton secured Rigdon for his team when he used his only block to keep the singer from choosing John Legend as his coach.

Gyth discovered his love for music when he joined the family campfire jam session at age 15. Two years later, his father booked him a three-hour show at a biker bar. He’s been playing gigs there ever since. Gyth took his show on the road for a few years and came back a hometown hero after sharing the stage with artists such as Jake Owen and Gary Allen.

Andrew Sevener joined Team Blake after the country star was the only coach to turn his chair. The 22-year old was a natural fit for Blake’s team with his undeniably country sound during his Blind Audition cover of the Rolling Stones’ “Honky Tonk Women.”

According to his Voice bio, Andrew grew up in a musical family. His father was in a rock band and his mother was a country singer. When he was in the fifth grade, Andrew asked his dad to teach him guitar so he could impress his crush, and he’s been playing ever since.

The final member of Team Blake to compete in the finale is Dexter Roberts. Roberts also received a four-chair turn during his Blind Audition where he covered Randy Houser’s “Like a Cowboy.” Dexter is no stranger to reality singing competitions. The 27-year-old competed on American Idol during the show’s 13th season and ultimately placed 7th.

The Season 16 Voice results are as follows:

In a historic victory, the Season 16 winner of The Voice is…Maelyn Jarmon! Jarmon’s win marks the first victory for new coach John Legend.