By Megan Dinsdale on July 11, 2019
Advertisement 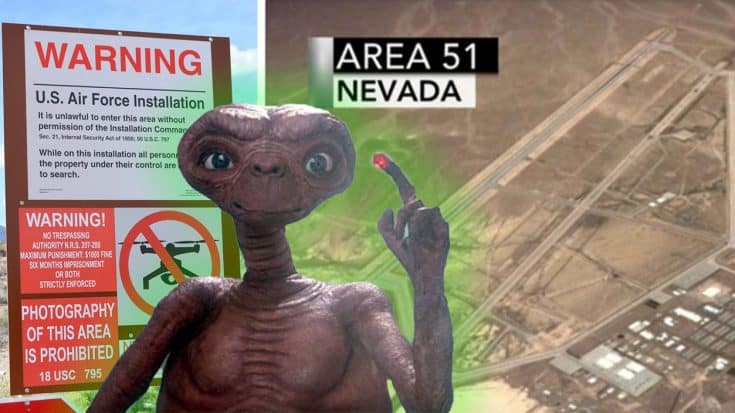 This plan is so crazy it just might work!

The moment we have all been waiting for! Well maybe not all of us, but a large group of alien truth seekers want to get to the bottom of the mystery surrounding Area 51 in the middle of the Nevada desert once and for all.

An event called Storm Area 51, They Can’t Stop All Of Us has gone viral and nearly 300,000 people are going, and another whopping 350,000 people are interested in storming Area 51. That’s more than half a million folks wanting some answers. If they honestly stormed it with that many people they might actually have a chance!  We don’t think this is actually going down or that the proposed plan will work, but since we are all curious let’s entertain the idea.

The plan is set around one simple fact, they can’t stop us all. The commander of this operation says in the description that they will meet at the Area 51 tourist attraction center and begin their descent.

We will all meet up at the Area 51 Alien Center tourist attraction and coordinate our entry. If we naruto run, we can move faster than their bullets. Lets see them aliens. – Jackson Barnes

The plan also requires everyone to Naruto run, which will enable everyone to move faster than bullets. We had to do some research to figure out what Naruto Run means, which derives from an anime cartoon where the ninjas run faster with their arms behind them because of decreased air resistance. We’re skeptical but here is what the run looks like.

The main strategy to rush Area 51

Once everyone gets close enough they will then initiate their final charge into Area 51 at the break of dawn. The plan calls for people to get hyped up on energy drinks to go berserk and run through fences and drywall. While the front lines are taking most of the heat, a second battalion will throw rocks to distract the US government from shooting everyone. They don’t want to harm anyone, but simply annoy them enough not to shoot the military base invaders.

Ok guys, i feel like we need to formulate a game plan, Ive put together this easy to follow diagram here for a proposed…

What’s next if all this works?

Say everything goes according to plan, we are wondering what happens once they do get inside. We assume all the secrets that have been locked up in Area 51 will be exposed and answers to questions that have been asked for more than half a century will be answered. Then everyone can make their way 80 miles south to Las Vegas to enjoy their victory. The event Storm Area 51, They Can’t Stop Us All is set for September 20th from 3am-6am. We’re betting over a million folks will be participating in this outrageous plan by then.

What is Area 51 and why we don’t recommend actually rushing it?

Area 51 is a HIGHLY classified Air Force base located just about 80 miles north of Las Vegas in the Nevada desert. Its actual operations over the last 60 years remain a mystery to the public and has inspired hundreds of conspiracy theories, which has probably sparked this event. We do know that employees fly in and out via restricted air space and that the perimeter is heavily guarded by “Camo Dudes.” These military guards take their jobs seriously and any attempt to breach the facility can and will be met with deadly force.

With this event going viral and being outrageous already, we suspect that the military base will be well prepared for September 20th. Check out this video below to learn a little more about this secret facility.