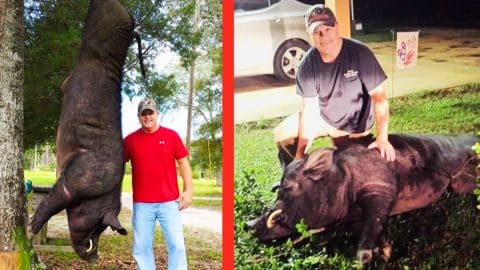 If nearly half-a-ton of wild boar wanders up to your front porch – you won’t just sit around and wait for it to do something. Neither did Wade Seago.

According to AL.com, this Samson, Alabama native was hanging out at home one night when his dog wouldn’t stop barking – but what was causing the ruckus would drop Wade’s jaw. That’s where the story takes a wild turn.

A trip to the gas station turned out to be a wild event for a north Alabama resident. Police in Decatur say a 350 pound wild boar charged at a customer at a Chevron off Highway 67. Police had to shoot the feral hog when it got near a busy road. https://t.co/Wfu81R4vLn pic.twitter.com/33suL3UTc3

Wild boars, which aren’t a native species to North America, have become a nuisance for many folks in the areas that they occupy – which includes much of the south, Texas, California, Arizona, and other areas.

Alabama’s laws are fairly lenient on hunting boar because they are vastly overpopulated and very destructive. Feral hogs are always in season, have no limits, and can be taken on private land at any time no matter what.

In fact, the U.S. Dept. of Agriculture estimates the wild hogs cause more than $800 million in damage each year.

While it’s not uncommon to run across feral hogs in Alabama, this one weighing more than 800-lbs is bigger than the majority – and certainly, one to write home about. The story of Wade’s insane encounter with this massive pig got the attention of national media outlets and television stations when he first shared the tale in 2017.

As Wade says, his family’s schnauzer, Cruiser, was flying off the handle barking at something near the house at their 100-acre property. He knew something was up just by the way the dog was barking.

Just as he was about to check on the dog, his daughter started screaming so he ran to the front of the house where she was looking through the window and at the very first sight – his jaw dropped.

Their dog had an absolutely monstrous wild boar engaged in the front yard – just five yards from his porch.

“Cruiser had this huge hog confused with all of the barking and movement,” he told AL.com. “It was not a good situation.”

Fearful the boar would hurt someone, the dog, or livestock, he quickly got a .38 caliber revolver and walked out onto the front porch. Three shots later and the pig went down.

The very next day, Wade hauled the pig to a local peanut company to have it weighed on their scales because it was too big for traditional methods. The final tally? A whopping 820 lbs. of wild boar and fully-grown six-inch tusks.

“I didn’t think twice about taking down this hog…I’d do it again tomorrow.”

Check out the video of Wade Seago’s massive hog below and let us know if you’ve ever seen one this big.