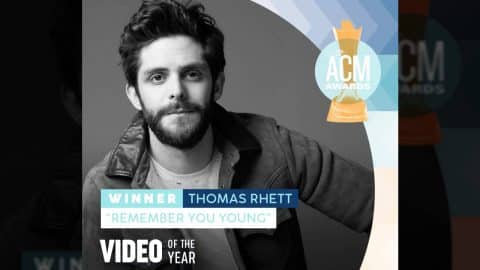 On September 20, 2019, Thomas Rhett released the music video for his single “Remember You Young.”

Since its release, the video has gotten almost nine million views not only because it’s a good song, but because of the moving story it told of a young love that turned into a relationship that lasted a lifetime and beyond.

The video also served as sort of a sequel to his “Marry Me” video from 2017, using the same actors and continuing their story in “Remember You Young.”

Posted by ACM – Academy of Country Music on Monday, September 14, 2020

An email from Melissa Moldovan, the Senior Marketing Manager for the ACM said, “Due to COVID-19 related restrictions, we are foregoing the in-person advance stunts for these categories we’ve done in the past (example, surprising winners on the ACM Awards red carpet).”

The ACM Awards will take place Wednesday, September 16 from several locations around Nashville and will be hosted by Keith Urban. Congrats to Thomas on this early win!

Watch his winning music video below.