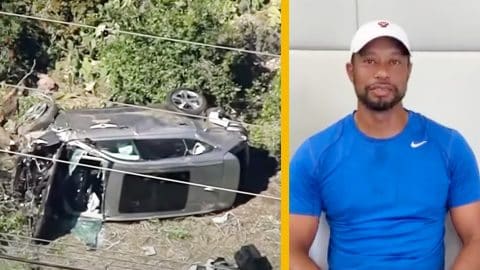 It’s been three months since pro golfer Tiger Woods totaled his SUV in a frightening crash in California. Now he’s speaking out for the first time about his recovery.

In an interview with Golf Digest, Woods said that his main goal is to walk on his own again after suffering traumatic injuries to his right leg.

When asked about his return to the game that made him one of the most famous athletes in the worlds, Woods had no comment, instead saying, “My physical therapy has been keeping me busy. I do my routines every day and am focused on my No. 1 goal right now: walking on my own. Taking it one step at a time.”

Woods suffered “comminuted open fractures” to both his tibia and fibula bones in his right leg when the 2021 Genesis GV80 he was driving crashed into a tree and rolled over. Investigators reported that Woods was driving 87 mph, more than 45 mph over the speed limit, when the accident happened.

“The primary causal factor for this traffic collision was driving at a speed unsafe for the road conditions and the inability to negotiate the curve of the roadway estimated speeds at the first area of impact were 84 to 87 miles per hour,” Sheriff Alex Villanueva said.

There was no evidence of impairment and Woods wasn’t cited for the crash, but he had to be extricated from the vehicle and was transported to Harbor-UCLA Medical Center where he underwent emergency surgery on his leg.

Woods is no stranger to surgeries and rehab, having undergone five back surgeries, five surgeries on his left knee and an arthroscopic procedure to clear scar tissue. But, he told Golf Digest that his recovery this time around is much more intense.

“This has been an entirely different animal,” Woods said. “I understand more of the rehab processes because of my past injuries, but this was more painful than anything I have ever experienced.”

It’s unclear if Woods can expect to regain full mobility and strength in his leg, but we wish him a full and speedy recovery.