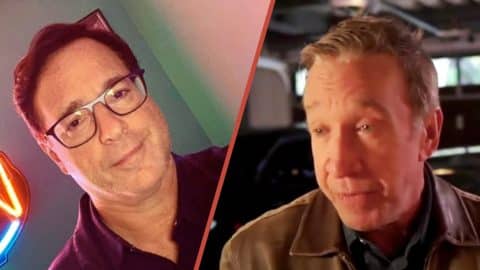 The world was shocked to hear the news that Full House star and comedian Bob Saget was found dead in his hotel room in Orlando, Florida on Sunday (January 9). He was 65 years old.

Saget’s passing was unexpected. He was in Florida on his I Don’t Do Negative comedy tour, and had just performed a two-hour set in Jacksonville the day before his death.

In his last post on social media, written just hours prior to his passing, Saget said:

“I’m back in comedy like I was when I was 26. I guess I’m finding my new voice and loving every moment of it. A’ight, see you in two weeks…And check BobSaget.com for my dates in 2022 – – Goin’ everywhere until I get the special shot. And then probably keep going cause I’m addicted to this shit. Peace out.”

Saget had many friends in the entertainment industry. One of those friends was Home Improvement and Last Man Standing star Tim Allen, who is also a comedian.

Allen was understandably devastated after he learned that Saget passed away. He channeled his grief into an emotional post on social media.

“Terribly sad news great friend, great comedian and wonderful man Bob Saget passed,” Allen said. He went on to say that Saget’s death “Hit [him] hard” and expressed his condolences to his family.

Allen further paid tribute to Saget in a second post. He shared an image of himself, Saget, Robin Williams, Rodney Dangerfield, and Jon Lovitz spending time together several years ago.

Saget, Williams, and Dangerfield have since passed away, leaving Allen and Lovitz as the only surviving comedians in the photo.

Allen captioned the picture, “Memory photo reminds me I am blessed to be in this business. Miss the ones who have moved to a higher venue.”

Memory photo reminds me I am blessed to be in this business. Miss the ones who have moved to a higher venue. pic.twitter.com/pA2L3Yh3tc

It’s obvious that Saget will be missed by all who loved him and his work. May he rest in peace.