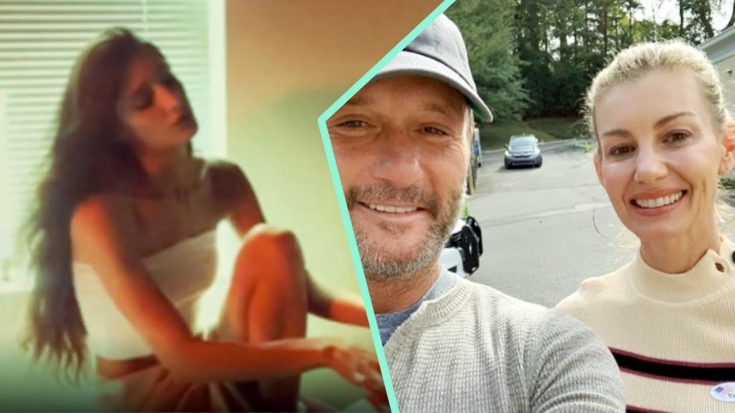 Tim McGraw and Faith Hill‘s three daughters are all grown up now. The country superstars were fiercely protective of their girls’ privacy while they were children. They were rarely photographed, and we hardly ever saw them out in public.

But now that Gracie, Maggie, and Audrey are all adults, Tim and Faith are more at ease with having them be in the public eye. In fact, both Gracie and Audrey have public Instagrams and fans of their own. Audrey even appeared in Tim’s official music video for “7500 OBO.”

We’ve heard all three girls sing before, and they all have gorgeous voices. Audrey was a young teen when she was filmed singing The Chicks’ “Travelin’ Soldier” at a VIP party on her dad’s Sundown Heaven Town Tour in 2014.

Audrey is now 20, and her singing voice is even more beautiful. She recently shared some videos to showcase her singing talent. One of those videos shows her singing Brandi Carlile‘s 2017 single “The Joke.”

“The Joke” is a song that Audrey loves. She made that obvious in the caption for the video she shared, writing, “… this song!! @brandicarlile you queen.”

Audrey also played the keyboard while she sang her own rendition of “The Joke.” Her followers loved her mesmerizing performance.

“Your voice brought me to tears…AMAZING,” commented one of Audrey’s followers.

Another person wrote, “That was so moving. What a beautiful voice.”

Several people mentioned how similar Audrey sounds to her mama Faith when she sings. “Sounds amazing! I can definitely hear your Moms grit in your voice!” read one comment.

Now you can hear Audrey sing “The Joke” by tuning in to the video below. She definitely inherited her parents’ musical talents!