By Miranda Raye on December 21, 2021
Advertisement 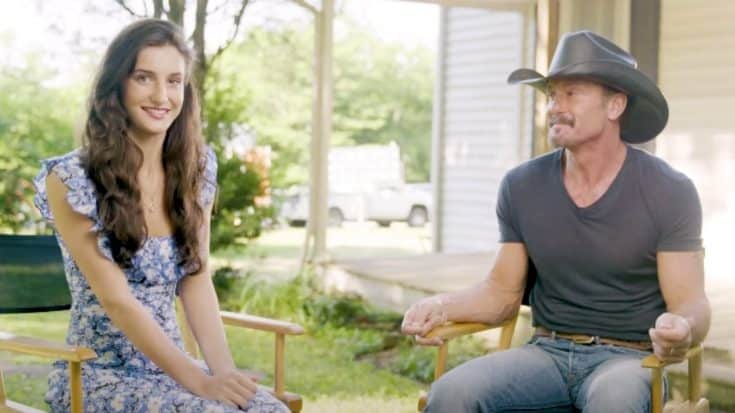 Tim McGraw and Faith Hill are the proud parents of three daughters: Gracie, Maggie, and Audrey. All three girls are now adults and are pursuing their own passions in life.

“My daughters have grown up to be strong, independent, outspoken, don’t take any s— from anybody, and they are really good, solid girls,” Tim said in a 2020 interview with ET Canada.

“I was really interested in it, to be a part of one of dad’s music videos sounded like it would be really fun,” she said. The music video gave Audrey the chance to showcase her acting skills, and she did a great job!

A passion for acting runs in Audrey’s family. Both of her parents have acted before, with Tim having the most experience of the two. He has starred in notable projects such as Friday Night Lights, The Blind Side, and Country Strong.

Currently, both Tim and Faith star in the new Yellowstone prequel series 1883. They play James and Margaret Dutton, the great-grandparents of the main series’ John Dutton (played by Kevin Costner).

On the day before 1883 premiered, Audrey was browsing through some books when she picked one titled Beautiful Ruins. In the book, she discovered a note her father wrote about her and her sisters many years ago.

The loving note discussed how Gracie, Maggie, and Audrey were all taking school exams. Audrey was only in fifth grade at the time:

“Finished this book while sitting in the living room,” Tim’s note read. “The girls are going through their exams right now (Maggie 9th, Gracie 10th, Audrey 5th grade). They have worked really hard studying this week (especially Gracie) I love them all so much.”

It touched Audrey to read the sweet words Tim wrote about her and her sisters. She also thought it seemed fitting that she found the note right before her parents made their debut in 1883.

She gushed about Tim and Faith’s work on the series, saying:

“Not only did I go into this book unknowingly, but I started with a lightness that has pulled me in due to my dad’s sweet proudness, it made me think of how proud I am of my parents. And I started this book on the Eve of the 1883 premiere. Something they have worked tirelessly and so hard on. I am so proud of them and their strength. And so excited to finally watch the show! To everyone who worked on this series. And to beautiful ruins.”

You can read Audrey’s post and see Tim’s original note below. What a precious memory to have!