Toad Gets Eaten By A Snake – And Survives 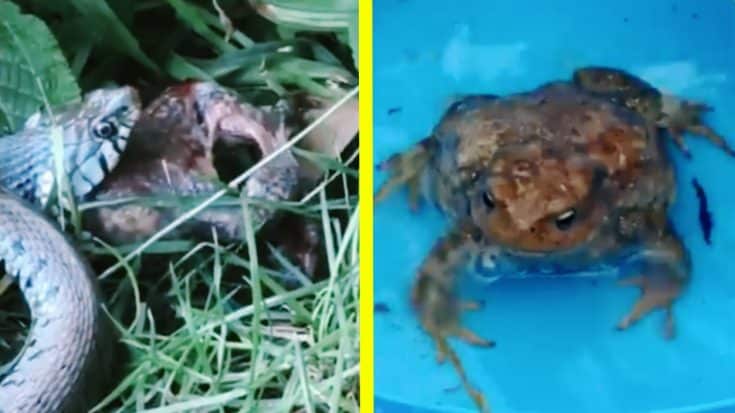 Richard Hancock was in the garden outside his home when he noticed his Jack Russell terrier was playing with a snake. To save his dog, he quickly pulled it away and took it in the house. Ten minutes later, he went back outside to see if the snake was still there and what he saw blew his mind.

“It was an incredible sight — I always have my phone on me to capture rare moments like this,” Richard said, according to the New York Post.

Richard pulled out his camera and recorded a video for 44 seconds showing the snake squirming around on the grass and then slowly regurgitating a massive toad. The toad was so big it was really shocking to see the snake was able to swallow it.

After the snake spits the toad up, it appeared to still be alive, so Richard rescued the toad and put it in a blue bowl of water to recover. It’s a miracle to see the toad was still breathing after being swallowed and squeezed like that. The toad kind of just sat there dazed, confused, and in a state of shock as Richard’s girlfriend, Sarah Leather, who’s a former veterinary nurse, rubbed its belly while saying kind words to it.

The family thought about keeping the toad overnight to help it recover but within no time; the toad was croaking and jumping all over the place so they decided to let it go. They took it outside and let it go under their porch to be on its own.

Watch The Video Below To See The Toad & Snake