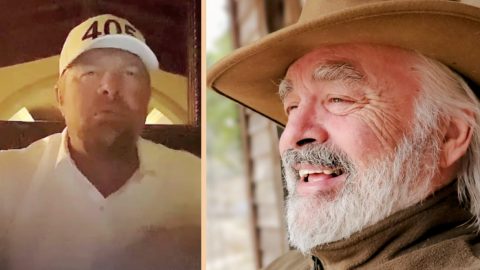 Hal Ketchum, the voice behind unforgettable songs such as “Small Town Saturday Night,” “Past the Point of Rescue,” “Five O’Clock World,” and “Sure Love,” passed away on November 23. He was 67 years old.

Country artists such as Georgette Jones, Chely Wright, and The Oak Ridge Boys paid tribute to Ketchum on social media.

“RIP brother Hal Ketchum … just 67 years old … so sad to lose yet another one this year …” The Oak Ridge Boys wrote on Twitter, referring to how many country icons have passed away in 2020.

RIP brother Hal Ketchum … just 67 years old … so sad to lose yet another one this year … pic.twitter.com/7c2XGhDv1a

Another artist who paid tribute to Ketchum was Toby Keith.

Keith kept his message simple, writing “RIP Hal Ketchum.” But his short message was accompanied by a video of him covering Ketchum’s Top 10 song, “Past the Point of Rescue.”

The video Keith shared was actually filmed back in May. During that time, Keith was stuck down in Mexico and was sharing almost daily cover videos of some of his favorite, lesser-known country songs.

He had left his guitar behind at home, so he went to a furniture store in Mexico and bought an old guitar to play. Because of this, he called his cover videos his “Furniture Store Guitar Sessions.”

As long as people like Keith continue to share Ketchum’s music, his legacy will never fade. May he rest in peace.