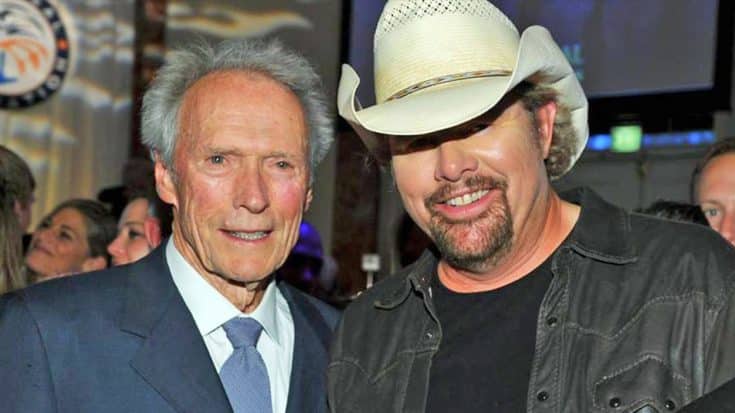 Award-winning country singer, songwriter, and actor, Toby Keith has had his fair share of successes during his career. Since the release of his first studio album in 1993, Keith has hardly slowed down. From record producing to acting on the big screen, Keith has made the most of his 15-year long career. In the singer’s most recent project, he decided to play a little behind the scenes as he wrote a song for the upcoming Clint Eastwood film The Mule.

The 2018 film, The Mule is an American crime story produced and directed by Clint Eastwood, who also plays the lead role. The film is based on a true story of the WWII veteran, Leo Sharp, who became a drug dealer and mule for the Sinaloa Cartel. The Sinaloa Cartel is considered to be “the most powerful” according to the United States Intelligence Community and in 2017, they were found to be the most active drug cartel involved in smuggling drugs into the U.S.

The film showcases Eastwood as 80-year-old Sharp and the secret life he hides from his family while being a drug mule. The film – which is scheduled to be released on December 14, 2018 – features the song “Don’t Let The Old Man In” written by Keith.

"Don't Let The Old Man In," Toby's new song featured in @themulefilm, is now available everywhere! The song was inspired by a conversation that Toby had with Clint Eastwood. Toby asked him what keeps him going, and he said, "I get up every day and don't let the old man in," and the song was born. Link in bio!

Keith spoke about his inspiration behind the song which all started with a conversation he had with Eastwood.

“Toby asked him what keeps him going, and he said, ‘I get up every day and don’t let the old man in,’ and the song was born.”

A Peek At The Powerful Lyrics

Although the song isn’t set to be released until Saturday, Keith teased fans with a preview that featured clips from the film. One chorus of the song tells this story,

“Many moons I have lived. My body’s weathered and worn. Ask yourself how old would you be, if you didn’t know the day you were born.”

The verse following continues as,

“Try to love on your wife and stay close to your friends. Toast each sundown with wine. Don’t let the old man in.”

The song has a very powerful meaning behind it which is a usual theme for the country singer. We can’t wait to hear the rest of “Don’t Let The Old Man In.”

Check out Toby Keith’s preview below, featuring clips from The Mule.

Hear Toby's song from The Mule Film, "Don't Let The Old Man In," in the new music video!