By Manly Bryant on August 22, 2019
Advertisement 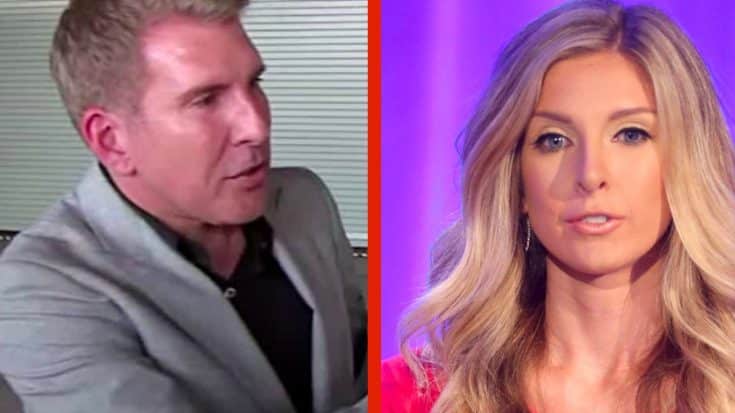 Just a week after Todd Chrisley was indicted on 12 counts of conspiracy, fraud, and tax evasion – and his eldest daughter claimed he was trying to blackmail her with a sex tape…Todd says all is “forgiven.”

It is rumored that Lindsie Chrisley had a part in her father Todd and her step mom Julie being charged with tax evasion. According to sources, Lindsie has been distancing herself from the family for many years now. She is also saying that her father and step brother Chase have been blackmailing her with a sex tape she made with Bachelorette contestant Robby while married. How do you feel about this whole family drama? Are you team Todd and Chase or team Lindsey? FOR MORE ON THIS STORY AND OTHERS BE SURE TO FOLLOW @chatternews – – – #dothechrisleysknowbest #chrisleyknowsbest #toddchrisley #chasechrisley #lindsiechrisley chrisley #juliechrisley #thechrisleys #bachelorette #entertainmentnews #entertainment #news #taxevasion #sextape #manipulation

Todd’s eldest two children from his first marriage both were estranged from their father – until recently. Kyle, who was formerly estranged due to issues with his battle with drug addiction shared a post on Facebook that explained how he and his father made amends.

But, in that same note, he also said that his sister Lindsie and their mom (Todd’s first wife) were responsible for getting Todd & Julie Chrisley in trouble with the feds.

“About a year and a half ago my biological mom and my sister, Lindsie were responsible for turning my dad in to the Georgia department of revenue for tax evasion,” his statement read, in part.

As news spread of their legal woes and the documents started circulating online, Todd’s estranged daughter Linsdie Chrisley made shocking accusations against her father and her half-brother Chase Chrisley.

According to People Magazine, and a police report from Georgia obtained by TMZ – Lindsie alleges that her brother and father “harassed and threatened her” over an alleged sex tape.

Nowhere in her claim does she specify who was in the tape with her. She does claim that the reason they were trying to blackmail her was so that she would lie about the financial issues her family is facing – and “if she refused to do so, they were going to release the sex tape.”

Todd Chrisley, who has remained very quiet during this whole financial crimes ordeal – with the exception of his Instagram post proclaiming his innocence – issued an official statement to People Magazine addressing Lindsie’s allegations. And airing some of her own dirty laundry.

“It’s heartbreaking and shameful that these kinds of accusations have to be aired in public. We have tried to keep Lindsie’s extramarital relationships with Robby Hayes and Josh Murray private for her sake since August of 2016,” he said.

On one hand, he said it’s shameful for her to be bringing this up publicly…and on the other, he revealed her alleged infidelity and naming names.

Silence is the best reply to a fool ?

Since this all has happened, Todd has apparently changed his tune in a new episode of his podcast “Chrisley Confessions” with his wife Julie.

Offering Lindsie a blanket amount of forgiveness for her actions, he said: “She will always be my daughter, that will never change. She is my firstborn child, and she is loved, and this is her moment for her to say whatever she wants to say regardless of whether or not its true or not; she is forgiven.”

Todd also went on to say that folks should expect a lot of “revelations” in their federal financial crimes case.

This story continues to develop…