By Manly Bryant on August 15, 2019
Advertisement 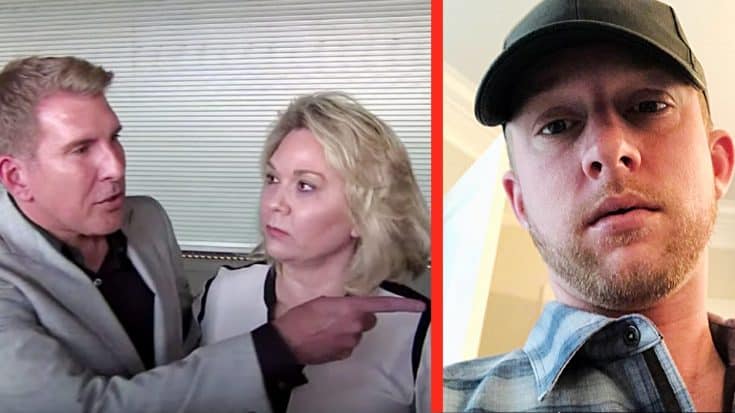 In one of the most surprising twists of the entire Chrisley Knows Best drama that’s been happening this week, it appears that both of Todd Chrisley’s estranged children have made very shocking statements publicly about their father – and each has chosen a side.

Both Todd and Julie Chrisley were taken into FBI custody and arraigned on Wednesday, August 14th, 2019 after a federal grand jury indicted them on 12 charges that include fraud, conspiracy, and tax evasion.

In an announcement on Tuesday, August 13th, 2019 – the U.S. Attorney of the Northern District of Georgia revealed the indictment against the Chrisley pair.

“Todd and Julie Chrisley are charged not only with defrauding a number of banks by fraudulently obtaining millions of dollars in loans, but also with allegedly cheating taxpayers by actively evading paying federal taxes on the money they earned,” said U.S. Attorney Byung J. Pak. “Celebrities face the same justice that everyone does. These are serious federal charges and they will have their day in court.”

Investigative reporter for WSB-TV, Rachel Carr, was live-tweeting the entire process and explained that the Chrisley’s were set free on $100,000 bonds each with travel restricted to Middle Tennessee and Northern Georgia – with some permitted travel to California for their reality show.

But now, Chrisley’s long-estranged son Kyle Chrisley has come forward about the financial crimes his father and stepmother are charged with through an explosive statement that left some people absolutely surprised.

As recently as 2017, Kyle has spoken openly against his father and stated in an interview with Good Morning America that his dad “bragged” about not paying taxes and said he should be “held accountable” for that.

However – Kyle is recanting that statement with a new post to his social media.

“I know the interview I did bashing my dad OVER A YEAR AGO is being shared on social media,” Kyle wrote on Facebook. “Honestly I’m tired of it.  You guys don’t have the facts and I need to set the record straight once and for all.  Everything I said in my interview was a lie. These allegations against my dad are all LIES!”

This was just one part of his statement, but it appears that Kyle is saying he and Todd are no longer estranged. They had many issues between them in the past that was centered on Kyle’s drug abuse, however, Kyle says that is all in the past now.

“My relationship with my dad was really rocky,” Kyle wrote. “I was battling drug addiction and I felt like he was trying to control me…9 months ago I went to my dad with an apology. His words were: ‘I love you always, and you are forgiven.’ And just like that, I was welcomed back into his life with open arms.”

Kyle, who is now sober, claims that his biological mother (and ex-wife of Chrisley) along with his sister, Lindsie Chrisley, are to blame for the trouble his father is now facing.

“About a year and a half ago my biological mom and my sister, Lindsie, were responsible for turning my dad in to the Georgia Dept. of Revenue for tax evasion.”

Authorities at both the state and federal level have not confirmed or denied this allegation. Lindsie has made a shocking claim that her father and one of her brothers tried to extort her with a sex tape of an extra-marital affair.