By Jennifer Pernicano on March 12, 2019
Advertisement 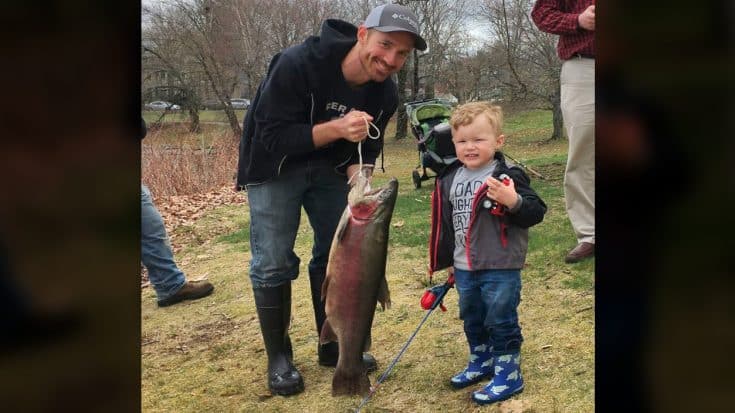 There’s no doubt about it: this three-year-old was the talk of the town!

Young Zach went fishing with his dad at Jamaica Pond in Massachusetts in May 2018.

Zach’s fishing rod of choice was a blue and red Spiderman rod, and to everyone’s surprise, he reeled in a huge rainbow trout!

The official Massachusetts Department of Fish and Game Twitter account tweeted a photo of Zach standing next to his big catch – which is almost bigger than he is – while he is holding his Spiderman fishing rod with a huge smile on his face.

Earlier this month, Zach (age 3) caught one of the large rainbow trout that MassWildlife stocked in Jamaica Pond with @MassGovernor (on his Spiderman® fishing rod, of course). Nice catch! For all trout stocking updates, check https://t.co/6xBllrNa63 (photo: Phil Kidd) pic.twitter.com/SLqQmkZkTX

Massachusetts Governor and the State of Massachusetts stocked Jamaica Pond with 1,000 trout for anglers of all ages to enjoy the outdoor sport.

Zach isn’t the first little kid to reel in a fish on a toy rod, let alone a Spiderman rod! But from the looks of these photos, his catch is the biggest.

@RachelRollar My kids caught a 10 pound catfish with me today on Lake Norman with a Spiderman fishing rod 🙂 pic.twitter.com/4MvLGKmRRD

A little boy named Kaden caught his first fish on a toy rod, and his reaction is priceless.Watch it in the video below!