Toddler Plays On Giant Snake While Parents Film It 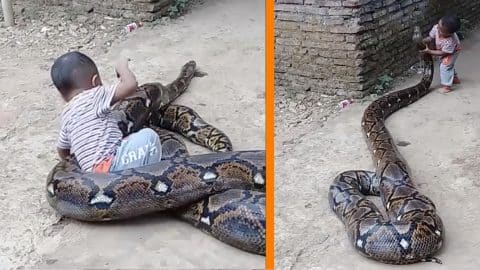 One of the craziest videos to hit the internet shows a toddler probably no older than three riding on the back of a 15-foot python while the parents film it.

The video starts out with the kid sitting on top of the snake laughing and smiling as it attempts to slither away from the boy. He holds on and rides it like it’s a roller coaster and eventually rolls off its back to the ground.

The boy then stands up and sees the snake trying to get away so he runs to the head of the snake screaming, laughing and grabs it by its neck. He picks its head up and holds it right up to his face which had us on the edge of our seats.

It’s hard to believe how brave this little boy is and we’re even more surprised the snake didn’t strike at him. After he picks up the snakes head, he attempts to get it to crawl back the other way but the snake’s so strong it keeps on slithering away.

We’re not sure exactly where this was filmed, but it’s definitely a crazy thing to see. It’s hard to believe that the parents would let their kid do this.

It does appear the snake had eaten earlier because it looked like it had a full belly which may be why it didn’t attack the kid. Either way, we have to give it to the kid for being courageous, however, we definitely recommend you never let your kid do this.

Watch the full video below