By Miranda Raye on September 12, 2019
Advertisement 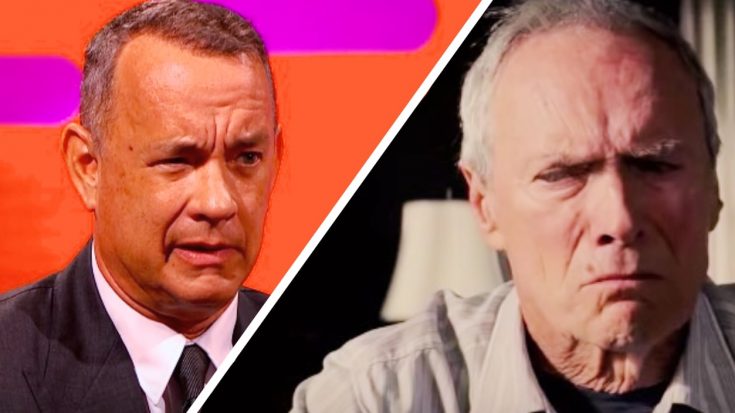 Two of the most highly respected actors in Hollywood are Tom Hanks and Clint Eastwood. And back in 2016, these two esteemed stars got the chance to work together on a movie that received an Academy Award nomination.

The movie we’re talking about is Sully, a biopic that tells the story of Captain Chesley Sullenberger, known for “The Miracle on the Hudson.” Hanks plays Sullenberger in the film, while Eastwood directed and co-produced the project.

A few months after the movie debuted, Hanks appeared on the set of the British talk show The Graham Norton Show. He spoke about his experience working with Eastwood, and had some comical things to say.

First, he explained that you never want to get “one of those Clint Eastwood looks” from The Good, the Bad and the Ugly star. He then showcased exactly which “look” he was talking about by mimicking one of Eastwood’s famous expressions.

Hanks then delivered a hilarious piece of information, saying that Eastwood “treats his actors like horses.”

That comment sparked some confusion, so Hanks explained. He said that back when Eastwood starred in the Western TV series Rawhide, the director always made a big fuss when it was time for the cameras to start rolling.

Hanks said that when the directors would yell “action,” the actors’ horses “would bolt” every time. Because of that, Eastwood takes a more gentle approach as director so he doesn’t spook his actors like his former directors would spook the horses on set.

But as Hanks explained, Eastwood’s softer approach is somehow even more menacing:

“So when you’re in a Clint Eastwood movie, you don’t even know the camera’s rolling, and you just hear over your shoulder, ‘Alright, go ahead,” he said, mimicking the tone of Eastwood’s voice.

As for what Eastwood says in place of “cut,” he’ll say “stop” if he wants an actor to stop and try the scene again. But if he is pleased with the performance, Hanks says he’ll go, “That’s enough of that.“

“It’s intimidating as hell!” Hanks commented. Based on the way he impersonated Eastwood when he said that, we can understand how intimidating that would be.

You can watch Hanks’ full Eastwood impression by tuning in to the clip below. He does a pretty convincing job.