By Jennifer Pernicano on October 3, 2018
Advertisement 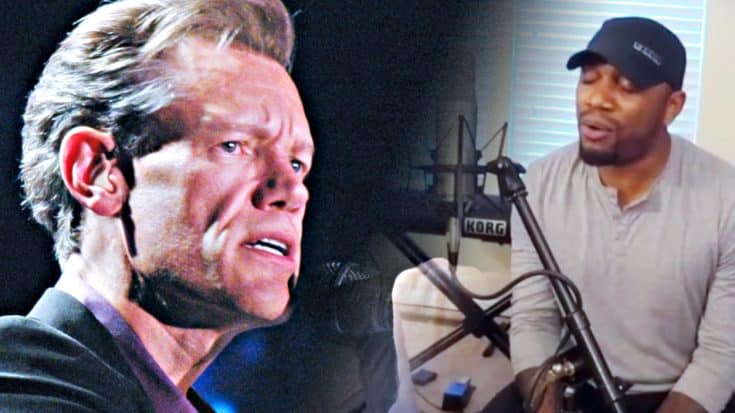 Breakups are hard. It’s the reason we have songs like Randy Travis‘ “Diggin’ Up Bones.” And while Travis released the original in 1986, Tony Jackson reminds us that the lyrics are just as real today as they were back then with his nostalgic cover.

When Travis first sang “Diggin’ Up Bones,” it was like he was speaking to every person who has gone through a tough break up that requires a period of mourning. The troubled ex-lover decides to go through the items throughout their home that remind them of their lost love. Each piece brings back a memory more painful than the next.

The lyrics are so real and relatable. It is no wonder the song hit home for so many, climbing the charts to #1 in both the U.S. and Canada. Since then, many have covered the classic hit – but no one has done it quite like this.

You might not know who Tony Jackson is yet, but you should. The talented singer from Richmond, VA just reached over 30 million views on his cover video of George Jones’ “Grand Tour.” His old-school voice brings back the classic country sounds you’ve been missing, and his “Diggin’ Up Bones” is no exception.

Hard to explain how it feels. It's pretty good though. ☺️ photo: @outlawmike1 #countrymusic #mohegansun

With just two friends joining him – one on guitar and the other on a Meinl Cajon drum – Jackson gives a raw and rugged performance of the tearjerking tune.

The power behind his voice is incomprehensible as he moves effortlessly through the slow-burning ballad about lost love and the inability to move on. But make no mistake, Jackson might be singing about “diggin’ up bones” – but this guy isn’t staying stuck in the past! Keep an eye out for him as he continues to gain popularity and new fans all over the country.

You can watch Jackson’s full cover below and let us know what classic hit you’d like to see him cover in the comments!