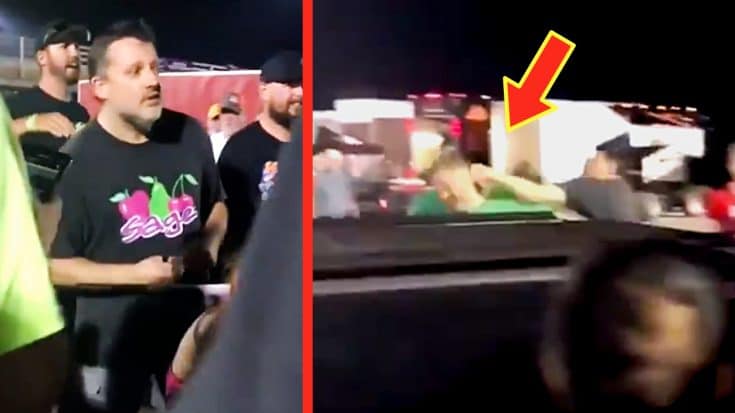 Caught on video by a smartphone-toting bystander, this altercation came just minutes after the former NASCAR superstar driver ended a race early at the Jackson Motorplex in Minnesota.

According to an eyewitness that spoke with TMZ, Tony Stewart had bummed out fans after his engine blew just one lap into the race at a highly-publicized event that featured him as one of the main racing attractions.

The 48-year-old driver was signing autographs and talking with fans after he exited the race early when one aggressive and angry “fan” started shouting insults and throwing profanities at Stewart for “quitting” – at least that’s according to eye witness Brandon Woehl.

The event which was advertised as “Tony Stewart Night” likely drew a lot of fans just to see Stewart in action, but when that action ended prematurely – some were upset. But instead of just going to see him and shake his hand, this one fan lost his cool…and so did Tony.

There was a bit of back and forth between the two before Tony flew the bird high for this dude to see it. But his response set Tony off like a rocket and he dashed straight toward the guy and socked him one hard punch right in the kisser.

The eyewitness, Woehl, claims that Tony was saying he broke his hand afterward and he was escorted away with incredible haste by his team while security handled the guy who just met Tony’s fist.

And this isn’t the first time Tony’s punched a fan…back in 2016 he punched another fan who turned out to be an off duty law enforcement officer.

Check out the full video below. (Warning: strong language.)

Looks like ol’ Smoke @TonyStewart had some fun at the dirt track tonight! Credit to Jeff Riddle for this awesome video. #NASCAR pic.twitter.com/Tt6wpBP5ew