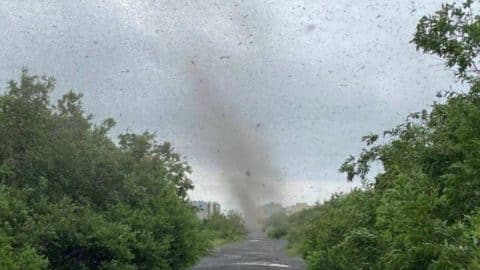 A wild video has been floating around the internet showing millions of mosquitoes flying together in such a fashion that it looks like a tornado of blood-sucking bugs.

This apocalyptic scene took place in the city of Kamchatsk, Russia which is alongside the Bering Sea, which is at the northernmost part of the Pacific Ocean.

A brave resident filmed the insane video showing a whirlwind of mosquitoes amassing together to form the tornado that appears to be going through the middle of the city.

According to NY Post, Alexei, from Kamchatsk, Russia said that he saw the “cloud” of mosquitoes and they appeared to go “for several hundred meters” and form several “giant pillars” of the insects. “I could hardly see the road,” he said.

Officials said that the nightmarish event is actually a natural occurrence that happens regularly in the region. It’s that time of year where it’s mating season for mosquitoes and this is what it looks like in that area of Russia.

“These are male mosquitoes swarming around one of several females in order to mate — there is nothing wrong with this,” Siberian Times reported entomologist Lyudmila Lobkova saying as she was speaking to Kamchatka Inform.

Authorities added that the events are either harmless or to be expected, but the phenomenon did not put a risk to any humans. Check out the mosquito tornado footage below!