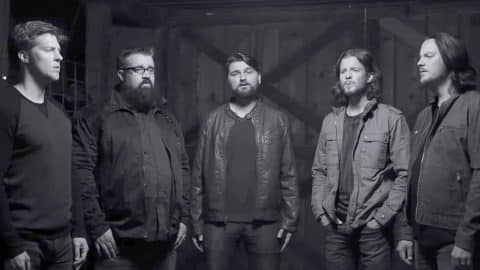 Country music is full of heartbreak songs. They are songs that listeners can relate to, as far too many know what it’s like to feel the pain of heartache.

After being in the business for several decades, you can bet that Trace Adkins has recorded his fair share of heartbreak songs.

One of the most devastating songs in that collection is a track Adkins included on his 2008 album, X.

Titled “I Can’t Outrun You,” the song was written by Ben Glover, Kyle Jacobs, and Joe Leathers. It is told through the voice of a man who has recently gone through a breakup and finds little reminders of his lost love everywhere he goes.

Since the song was never released as a single, it became a hidden gem in Adkins’ catalog of recordings.

Finally, that gem was uncovered by a cappella country group Home Free, who offered up their own rendition on their record, Timeless.

Home Free’s version of “I Can’t Outrun You” predominantly features baritone singer Adam Chance, who is the newest member of the group.

New video out. What are you waiting for? Link in bio.

The spotlight remains focused on Chance in Home Free’s music video for the song.

Filmed in black and white, the video opens with a shot of a truck driving down a country road. The camera then cuts to show Home Free standing in a semicircle in a dark room, with Chance in the center.

As the video progresses, it reveals that Chance was the person driving the truck. He happens to find a pair of his old love’s sunglasses, which appear in full color in the otherwise grayscale scene.

The video continues to show Chance returning home, where he finds an assortment of other objects that belong to the girl he once loved, including a brush, a ring, and a scarf. Every time he finds one of these objects, they appear in color, while the rest of the scene remains in black and white.

After coming across these sentimental objects, Chance has colorful flashbacks of happier times with his former flame. These flashbacks show that no matter where he goes, he’s always going to find something that reminds him of her.

The video’s visual beauty is significantly enhanced by Home Free’s vocal performance. Chance perfectly manages to capture the song’s mournful tone, and his bandmates add to it with their haunting harmonies.

Brace yourself and prepare to cry, because this video is about as emotional as it gets. You can tune in to it below.