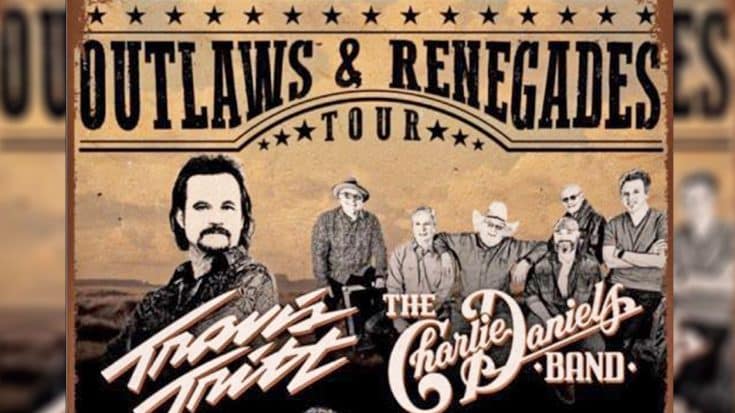 Fans are in for one hell of a year with the series of country music stars going on tour in 2019. With reunion tours, farewell tours, and now an outlaw tour traveling from coast to coast, the country music world is taking over.

Two iconic artists are joining forces for the tour of the year. Grammy Award-winner Travis Tritt alongside Hall of Famer Charlie Daniels and his band have announced their 2019 Outlaws & Renegades Tour. With special guest The Cadillac Three coming along for the fun, fans are in for a treat. Kicking off Friday, March 8 in St. Augustine, FL these talented pals are ready for a wild ride.

Catch these Outlaws & Renegades out of on tour this summer!

The tour will also feature appearances from The Marshall Tucker Band, Love & Theft and Copper Chief at select shows.

Stretching from the South through the Midwest and all the way out to the West Coast, these musical legends aren’t missing a single beat.

After three decades of producing hits, Tritt continues to sell out shows and be an iconic force for classic country music. With eleven studio albums and numerous chart-topping singles, Tritt has become a household name for the platform. The “Foolish Pride” singer even became a member of the Grand Ole Opry early in his career in 1992. With his southern rock sound, it’s no wonder he and Charlie Daniels are collaborating – again.

Thank you all!I had a ball tonight and the show was a SOLD OUT solo acoustic show at L'Auberge Baton Rouge! Great fans in a great venue! Thanks for having me back! ~ T

With several award-winning gospel albums and multiple country hits, Daniels has left an incredible impact on the industry. The multi-instrumentalist and singer has been spitting out legendary sounds since the 1950s. After decades in the music world, he has been inducted into multiple Hall of Fames and became a Grand Ole Opry member. Outside of the country music spotlight, Daniels works to help veterans through his organization, The Journey Home Project.

ON THIS DAY in 1998, a very surprised Charlie Daniels received the Pioneer Award at the 33rd Annual ACM – Academy of…

Posted by The Charlie Daniels Band on Monday, April 23, 2018

Who else is ready to get rowdy with these Outlaws & Renegades?! You can purchase tickets on both Travis’ website and Charlie’s.

Just in case you need more convincing, you can watch this sweet video of Travis Tritt on why Charlie Daniels is his hero. Gotta love these two!

Travis Tritt on why Charlie Daniels is his hero

Travis Tritt recalls a moment of kindness and humanity from a true country hero.Read more ==> http://on.rare.us/2gI9CQq