Treasure Chest Hidden A Decade Ago Was Found In Wyoming 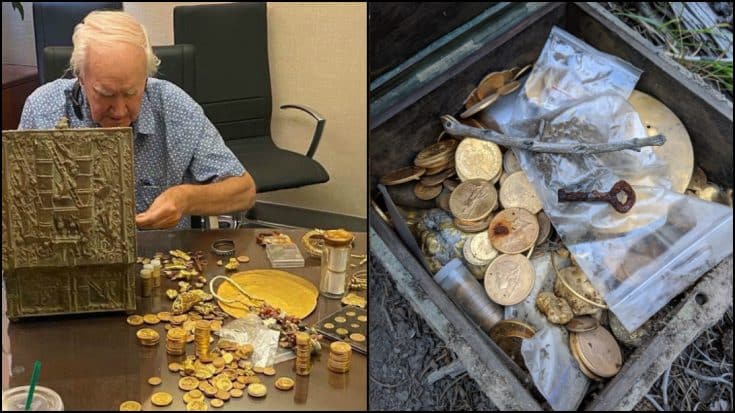 A bronze chest filled with at least $2 million worth of treasure was found after being hidden for at least a decade. The treasure was hidden by famed art and antiquities collector Forrest Fenn of Santa Fe, New Mexico, who posted clues to the treasure’s whereabouts online and in a 24-line poem that was published in his 2010 autobiography “The Thrill of the Chase.”

Hundreds of thousands of treasure hunters scoured the Rocky Mountains in search of the valuable chest, with many quitting their jobs to dedicate themselves to the search, and some depleting their life savings in hopes of discovering the treasure. At least four people died searching for it.

Fenn announced in early June that the treasure had finally been found, but disclosed that it was the desire of the finder to keep the location of the treasure, and his identity, a secret. Upon it’s discovery, Fenn posted the following statement on his website:

“It was under a canopy of stars in the lush, forested vegetation of the Rocky Mountains and had not moved from the spot where I hid it more than 10 years ago,” Fenn wrote. “I do not know the person who found it, but the poem in my book led him to the precise spot. I congratulate the thousands of people who participated in the search and hope they will continue to be drawn by the promise of other discoveries. So the search is over.”

The lack of information about the chest’s hiding place caused many to question if there ever was a treasure to begin with. And, many of those who had dedicated their lives to the search pleaded for details so that they could put their dream to rest. Other hunters simply wanted to know if they had ever been close to discovering the fortune.

But, Fenn now says “the finder understood how important some closure is for many searchers,” so he agreed to reveal the treasure was found in Wyoming, according to the Santa Fe New Mexican.

Fenn revealed the news in a blog post, saying:

“Many of the searchers for my treasure had solves that seemed to neatly fit the clues in my poem. Then when the finder found and retrieved the treasure, other searchers wondered how close they had been to the right spot. Because I promised the finder I would not reveal who found it or where, I have remained mostly silent.

However, the finder understands how important some closure is for many searchers, so today he agreed that we should reveal that the treasure was found in Wyoming. Until he found the treasure, the treasure had not moved in the 10 years since I left it there on the ground, and walked away.

Perhaps today’s announcement will bring some closure to those whose solves were in New Mexico, Colorado, or Montana.”