By Manly Bryant on February 5, 2020
Advertisement 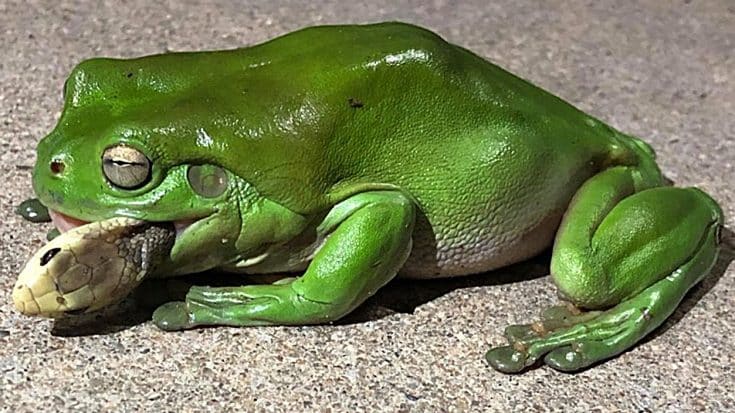 Snake catcher Jamie Chapel was called to a woman’s house located in Townsville, a coastal city on the edge of Australia to deal with a situation of a frog trying to eat a deadly snake. When he got to the scene what he saw shocked him. The tree frog almost had the highly venomous taipan completely devoured.

Posted by Townsville – Snake Take Away and Chapel Pest Control on Tuesday, February 4, 2020

Taipan are very venomous; they have the ability to paralyze a human’s nervous system and clot the blood in their body. Taipan are considered one of Australia’s most deadliest snakes and the third-most venomous land snake in the world. However, the frog was quite large and appeared to not be affected by the bite of the 10-inch snake.

Jamie, of Townsville Snake Take Away and Chapel Pest Control, told 7 NEWS AU, “I had the intention to save the snake, but it was too late. The frog was already eating it and wasn’t going to let it go. I was concerned the frog was going to die and regurgitate the snake.”

Posted by Townsville – Snake Take Away and Chapel Pest Control on Tuesday, February 4, 2020

Jamie said the frog finished eating the snake and he could still see it moving around inside the frog’s belly. For the safety of the homeowner, Jamie took the frog with him just in case the frog died so the snake wouldn’t crawl out into the woman’s home endangering her again.

He took the frog back to his home where he’s licensed to keep animals and is currently watching over the frog until he knows for sure it’s in good health. He plans to release the frog back into the wild once the frog is ready.

A snake catcher has had his job done for him…a frog devouring a highly-venomous taipan right in front of his eyes. #9News