Trisha Yearwood Explains Why She & Garth Brooks Are Almost Always Together

By Miranda Raye on August 30, 2018
Advertisement 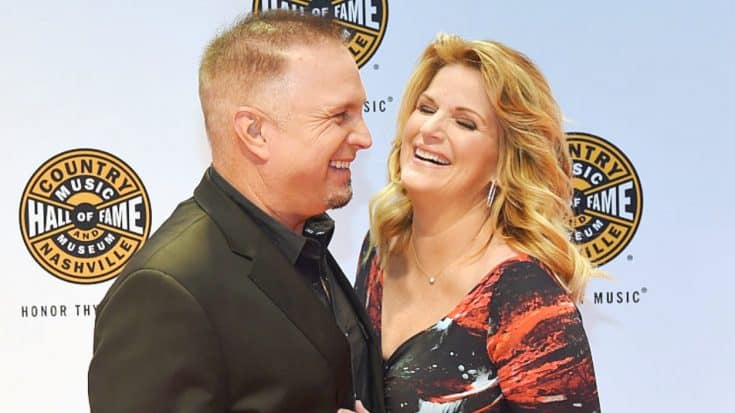 After being married for nearly 13 years, Garth Brooks and Trisha Yearwood‘s relationship is stronger than ever. All you have to do is listen to one half of the country power couple talk about the other to know that they’ve never left the “newlywed phase” of their marriage.

Even though both Brooks and Yearwood have their own projects and busy schedules, it seems that they’re together far more often than they’re apart. Take Brooks’ multi-year World Tour as an example. During that span, there were only a handful of concerts that Yearwood wasn’t able to perform at as well.

The concerts gave the couple the perfect opportunity to showcase their love for each other. On their anniversary in 2017, Brooks lined the entire stage with 12 bouquets for Yearwood and then serenaded her with his rendition of the romantic “Make You Feel My Love.”

Garth surprised Trisha on their 12th Anniversary tonight and sang “To Make You Feel My Love” to her! So sweet! @garthbrooks @trishayearwood pic.twitter.com/EVYJpXwEGo

Since you hardly see Brooks without Yearwood and vice versa, we’re sure you’ve wondered why they seem to do everything together. Well after years of wondering, you finally have your answer, thanks to Yearwood herself.

In an interview with Country Living about her and Brooks’ recent work with Habitat Humanity, Yearwood explained the reason why they try to be together as much as possible:

“We’ve been married almost 13 years, and when we got married we made a very conscious effort to be together and not apart. We’ve both been married before and it doesn’t work when you’re not together. That’s kind of been the benchmark of our marriage that we try really hard not to be apart. And we actually enjoy each other’s company. How weird is that?”

Yearwood also added that while some couples like to keep their professional lives to themselves, she and Brooks are the opposite. “Sometimes husbands and wives don’t want to work together but we work pretty well together,” she said.

It’s clear to anyone who watches Brooks and Yearwood sing together that they make a great team. Their medley performance of classic country tunes at the 2016 CMA Awards serves as perfect proof of that. Relive that performance below.

Knowing how well Brooks and Yearwood work together, we can’t wait to see what their next collaboration will be!